When he heard that people in Hong Kong were forming a human chain to call for democracy on Aug. 23, a local designer who goes by the name Phesti borrowed from the imagery of local subway signs to create a logo of figures holding hands. Underneath, in typography identical to that used by the train system, he wrote “HongKongers stand as one.” The image quickly went viral. 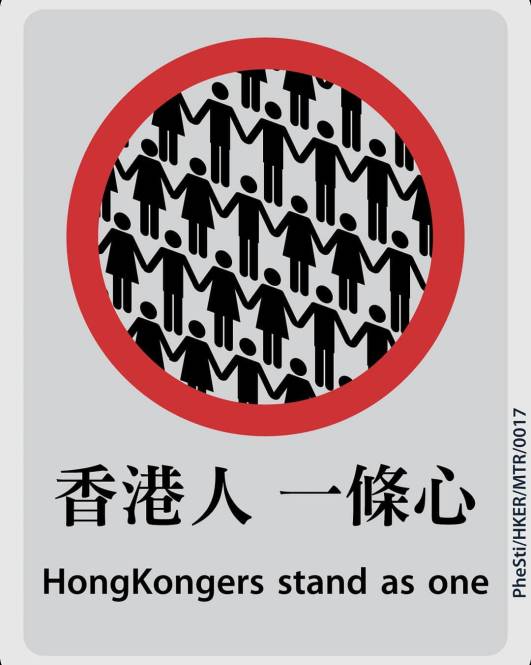 A parody of subway information sign created by Phesti.

Like many involved in Hong Kong’s protests, Phesti hides his identity behind a pseudonym. He is one of hundreds of anonymous creators turning out protest art to support the city’s push for greater political freedom. Phesti says his designs are for “people like me, who are in the peaceful camp don’t dare to protest on the front line and engage in more aggressive action.” He hopes the work will make such individuals “feel like they can still participate in something and find a way of saying what’s on their mind.”

Since Hong Kong’s young people rose up in a pro-democracy rebellion three months ago, protest-related digital graphics, illustrations and paintings have exploded. The collection of agitprop ranges from infographics and memes, to illustrations based on news photos, and various adaptations of the famous 1830 painting by French artist Eugène Delacroix, Liberty Leading the People. 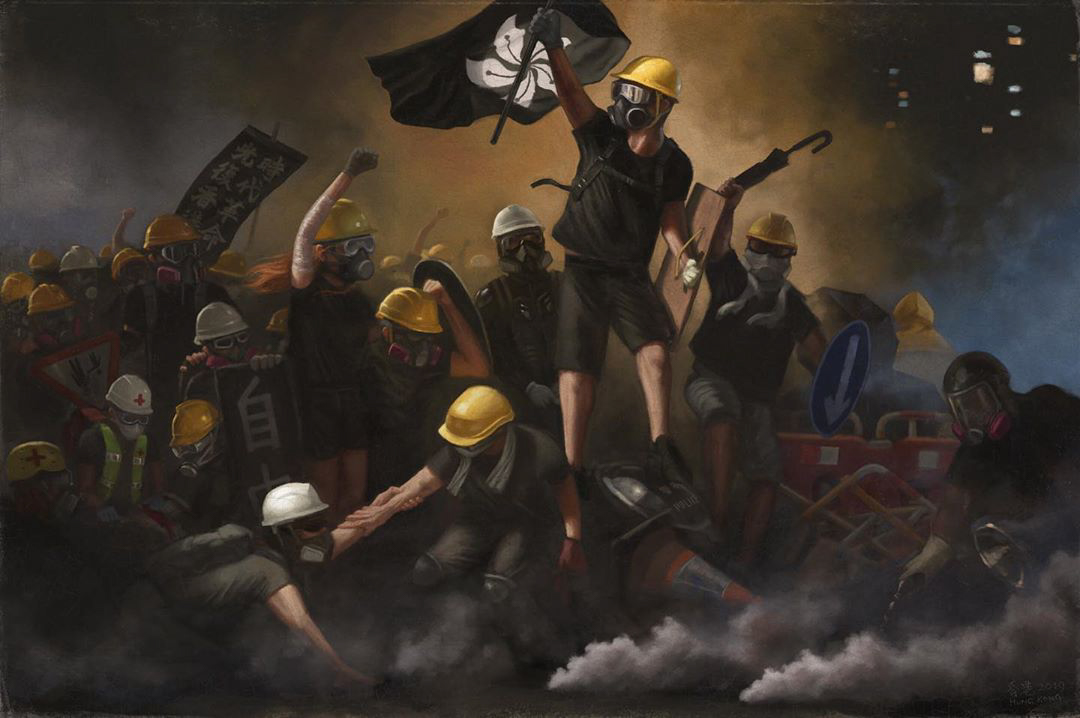 An adaptation of the painting ‘Liberty Leading the People’ by @harcourtromanticist 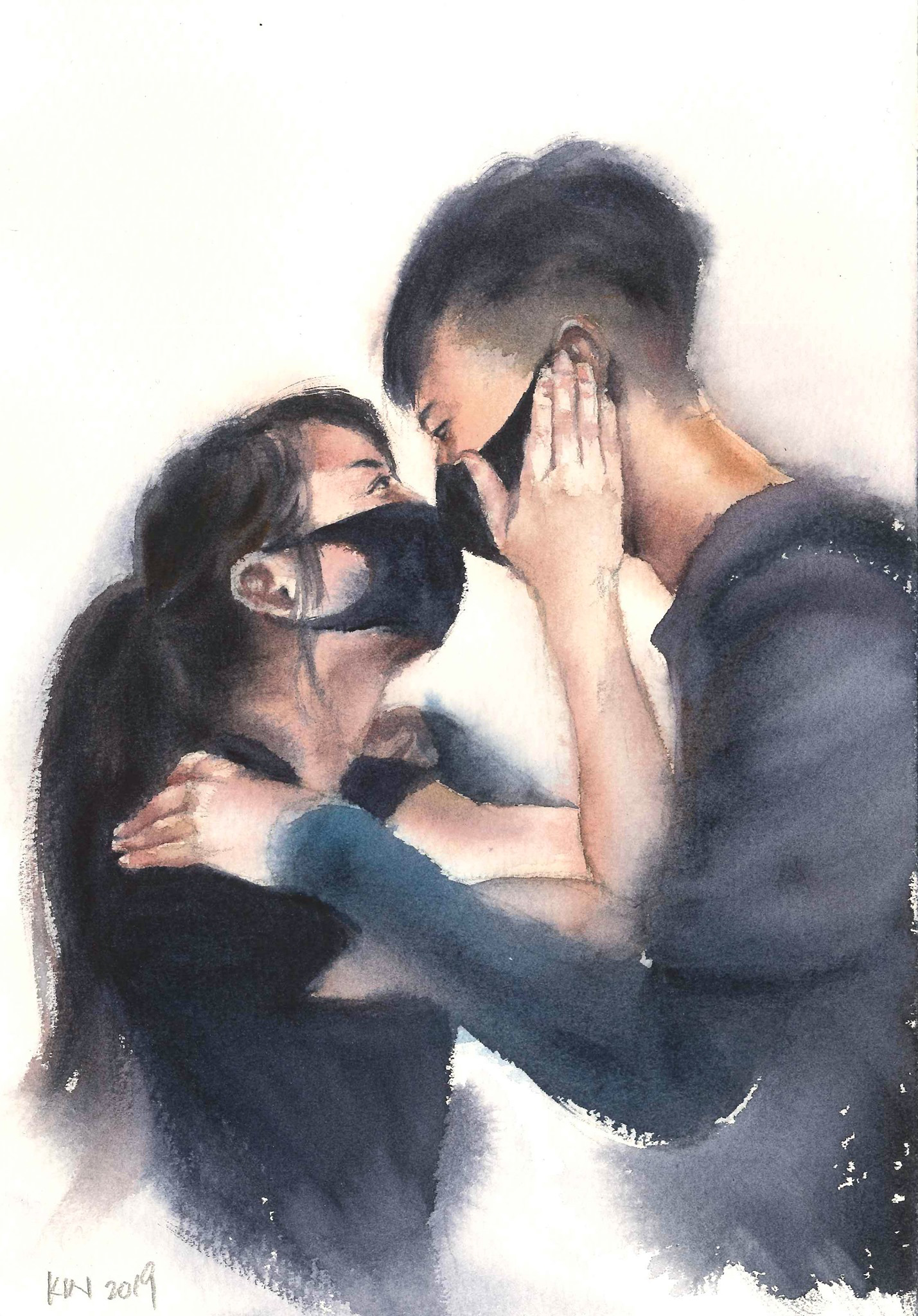 A drawing by Fung Kin Fan based on a photo taken by Reuters correspondent James Pomfret showing a young couple in masks. 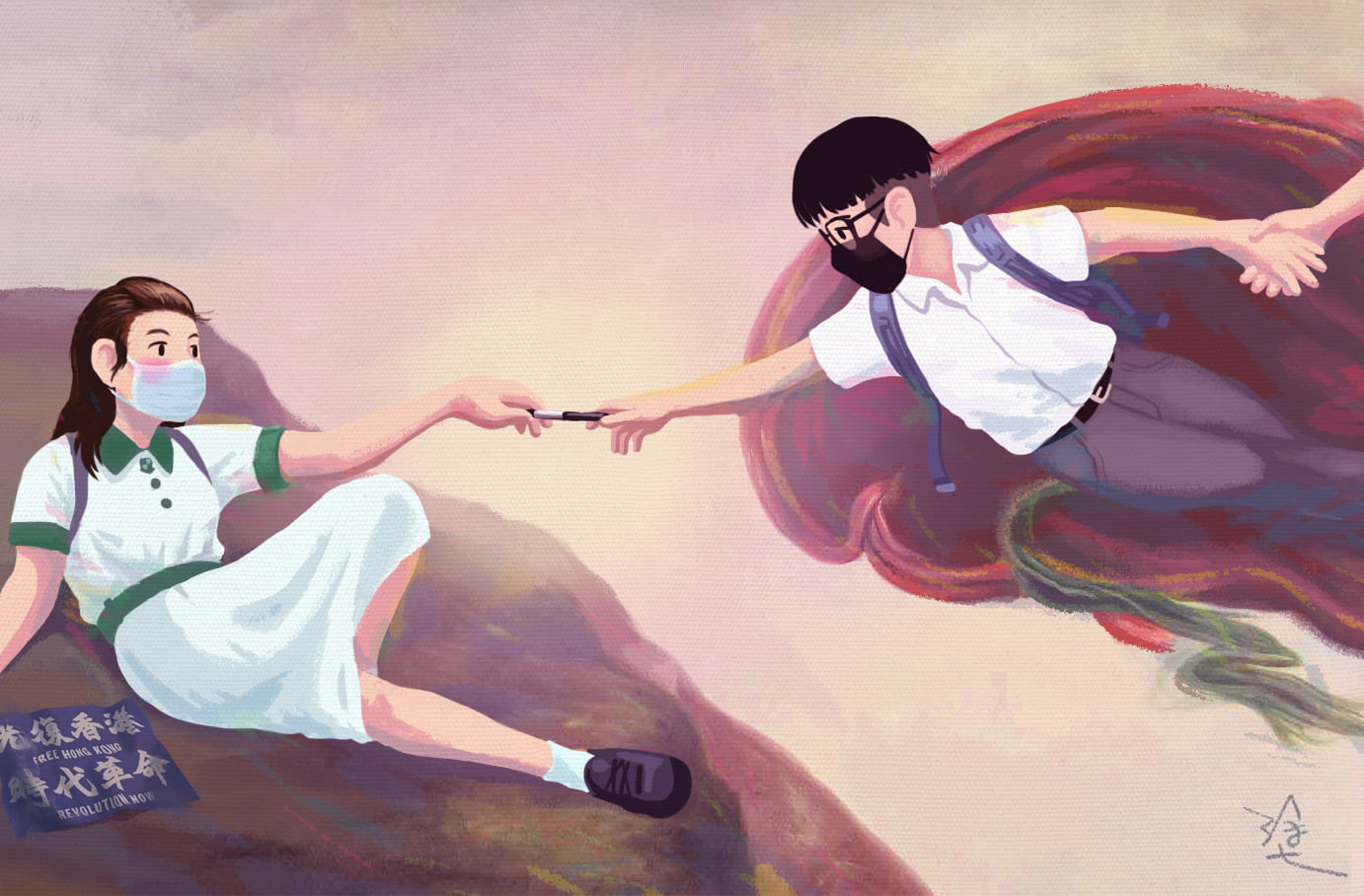 A drawing by Arto inspired by a photograph of two high school students participating in school strike, in the style of Michaelangelo’s fresco painting ‘The Creation of Adam.”

Not all of the work is serious. Some is designed purely to give viewers a good laugh.

“A lot of people are holding in their feelings, so some of these illustrations may offer them emotional relief,” says Arto, a satirist whose cartoons are hugely popular. “Fighting ridicule with humor is probably more effective than waging a public opinion war,” he tells TIME.

Much of the work plays on Cantonese slang and makes reference to local music, global pop culture and advertising. 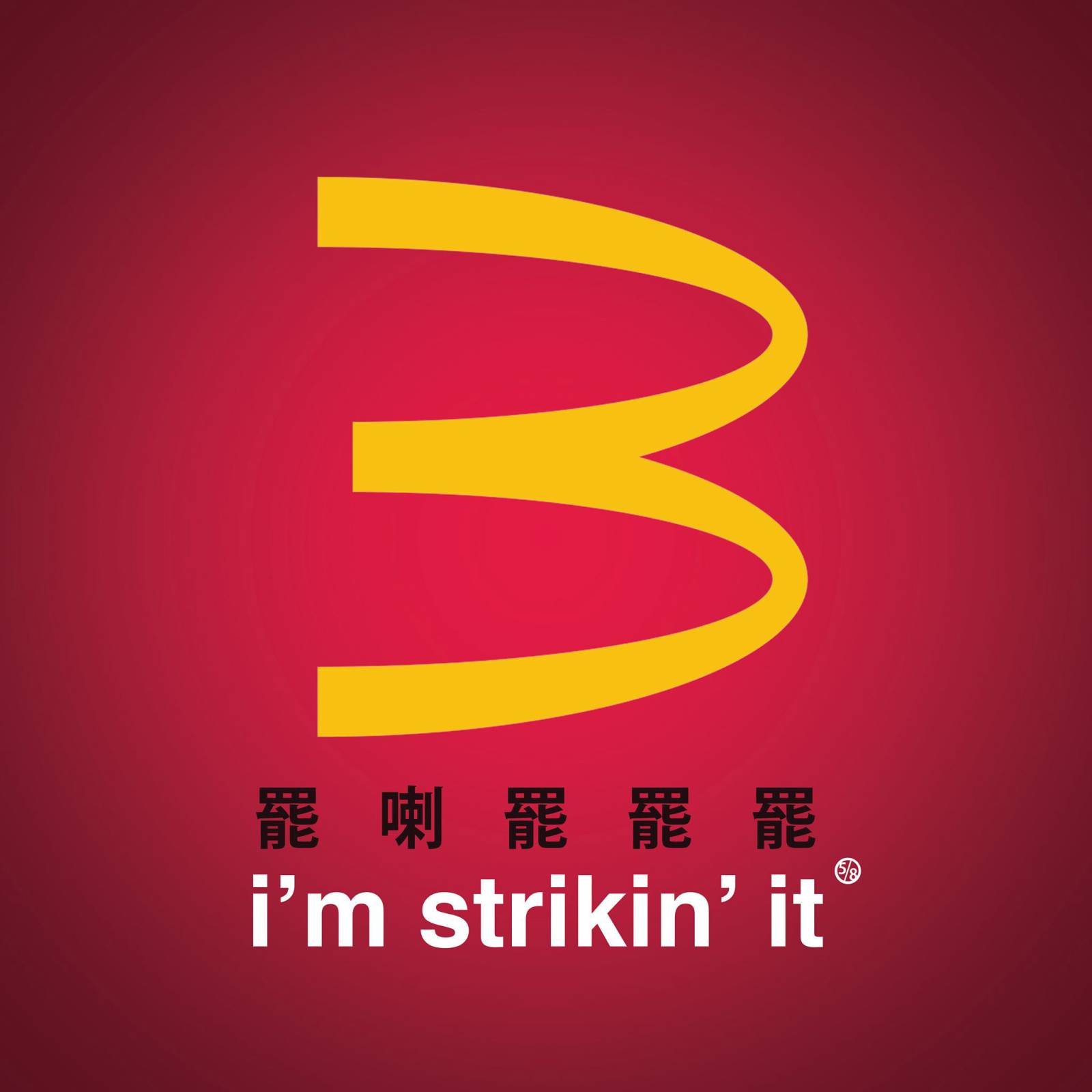 Graphic design by Arto encouraging people to join a general strike on Aug. 5. The character 罷 meaning ‘strike’ is pronounced as “ba”. The Chinese on this image reads as “ba la ba ba ba,” a reference to a McDonald’s jingle. The M is rotated 90 degrees to make a “3,” meaning strikes in three sectors: school, business and work. 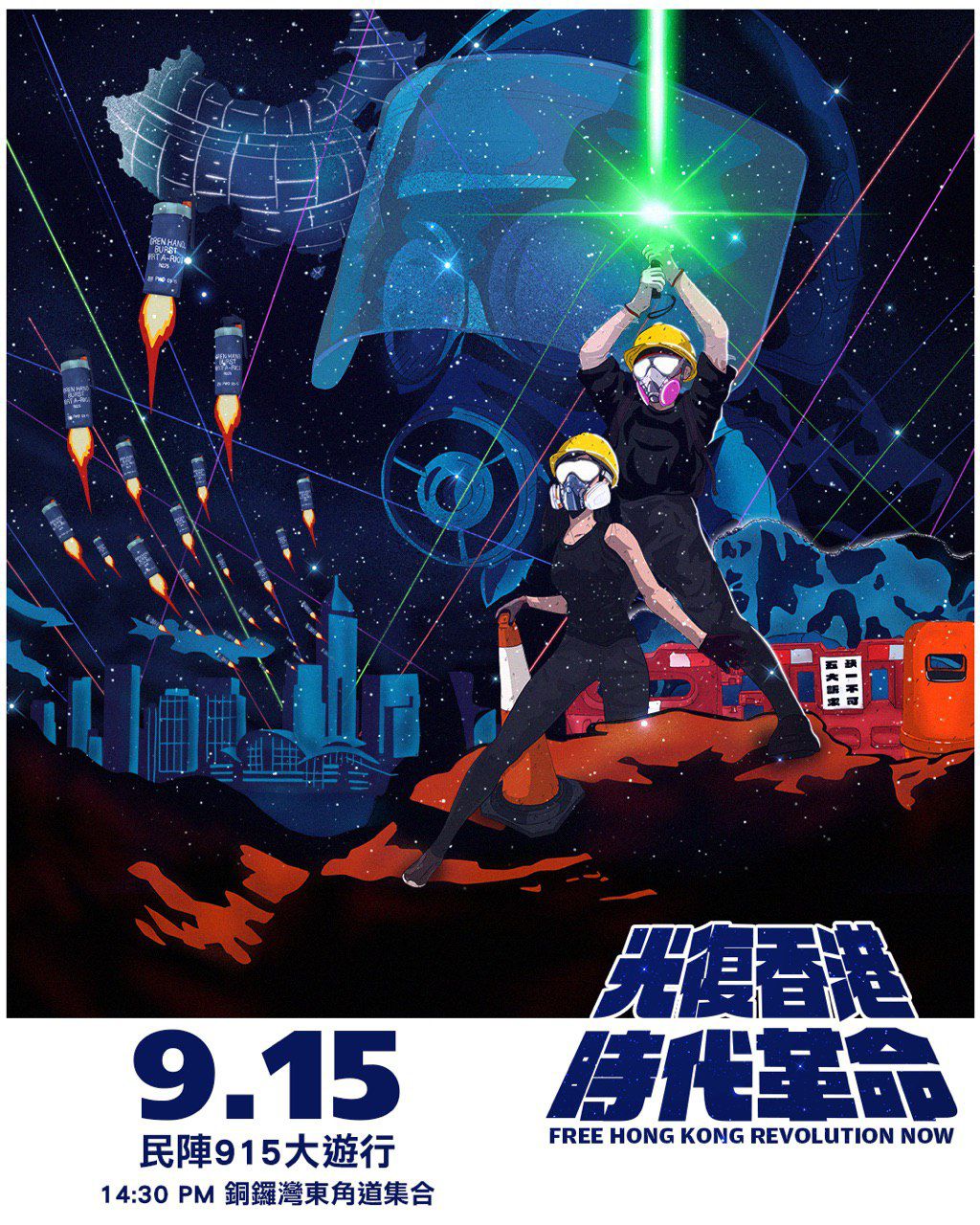 A poster inspired by Star Wars urging people to join a Sept. 15 march and rally organized by the Civil Human Rights Fronts, which was banned by the police. Source: Telegram 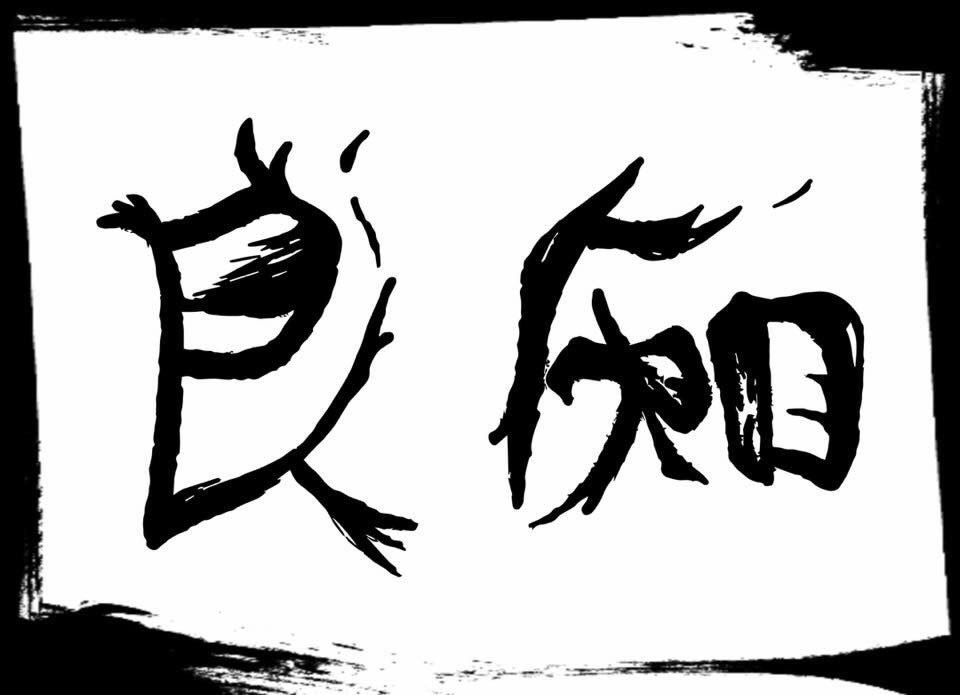 When reading upright, the two characters mean “conscience.” When tilted 90 degrees counter-clockwise, one character becomes “return” and the other becomes an icon of an eye. The image refers to the incident where a female protester was hit in the eye by a projectile on Aug. 11. Source: Telegram 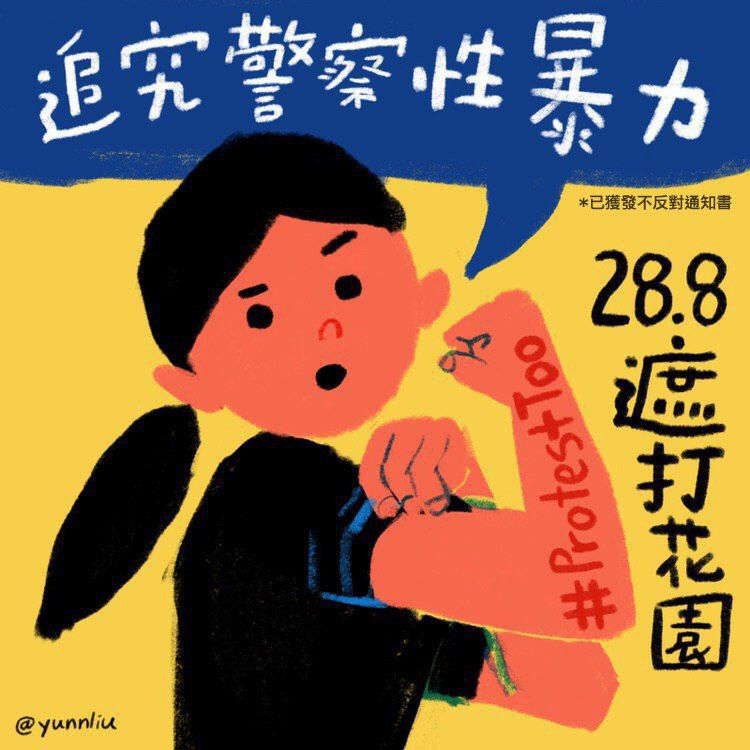 A protest poster encouraging people to join the #protesttoo rally on Aug. 28 at Chater Garden by @yunnliu.

A large number of the artworks get posted first to a special channel on Telegram, a messaging app frequently used by protesters, and from there the channel’s 90,000 or so subscribers spread them elsewhere.

The uploaded works are created by a team of some 200 designers working in shifts, one of the channel’s administrators and university design student Y tells TIME. They brainstorm ideas with thousands of people in another chat group and then turn their crowd-refined suggestions into visuals of different styles. 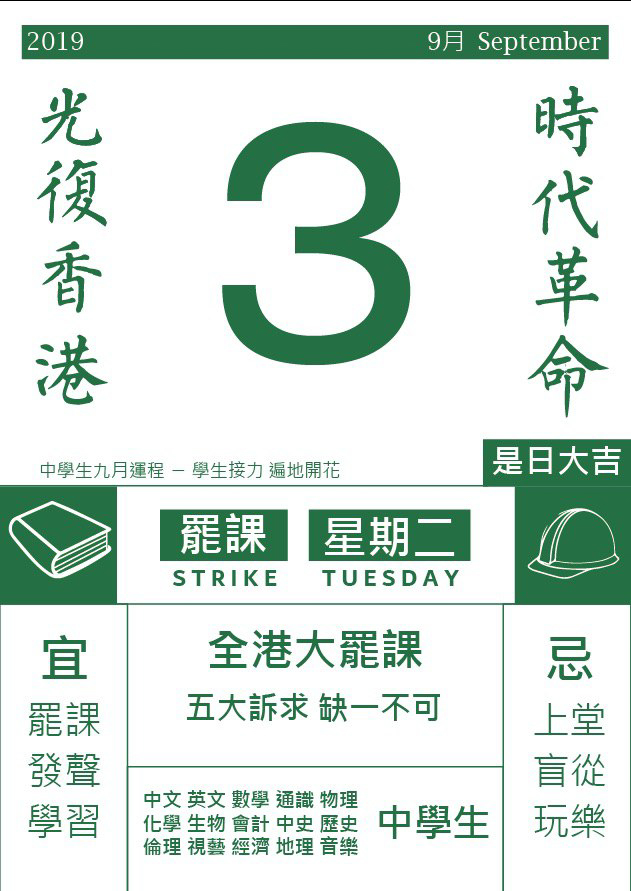 A design in the style of the Chinese almanac encouraging students to boycott classes on Sept. 3. Source: Telegram 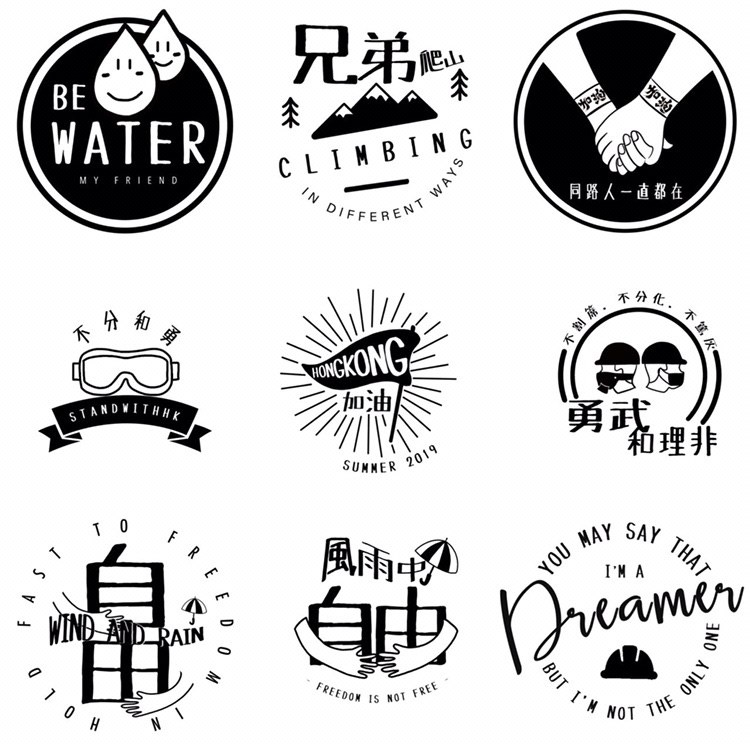 A collection of stickers of popular protest slogans and sayings such as Bruce Lee’s “Be Water,” and the rallying cry “Hong Kong, Add Oil” Source: Telegram

The government is unlikely to make further concessions to the protest movement, which also shows no signs of backing down. With no end in sight to the unrest, Y said the workload for artists and designers would only increase, and many report feeling exhausted with some dropping out. 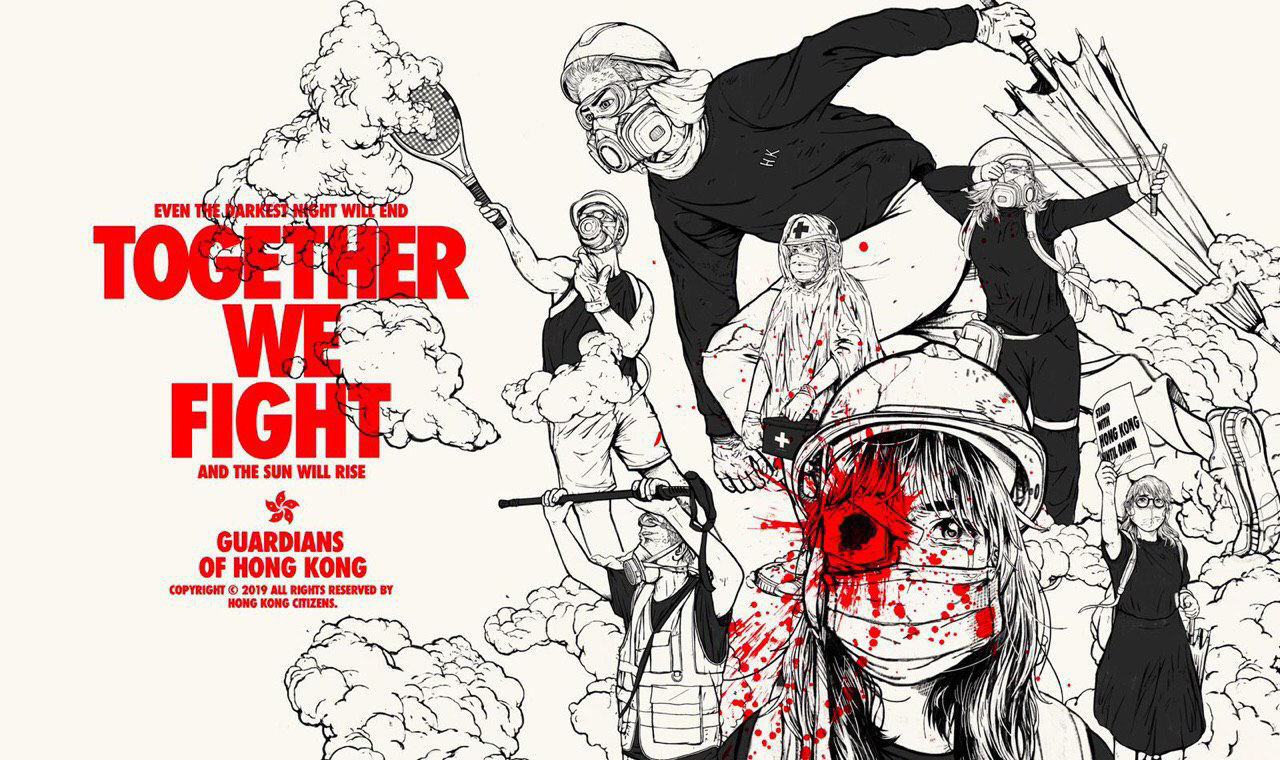 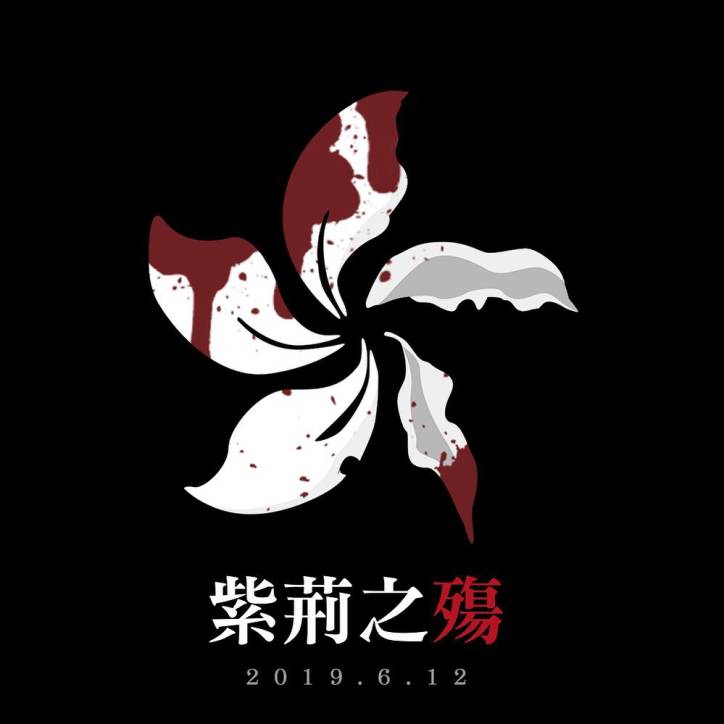 As the creator of a now iconic bloodstained version of Hong Kong’s official flower, the bauhinia, Y said he would keep the channel running until goals of the movement are achieved and do his best to take care of the wellbeing of other team members. “The common ground in this movement is not politics,” said Y. “It is humanity.” 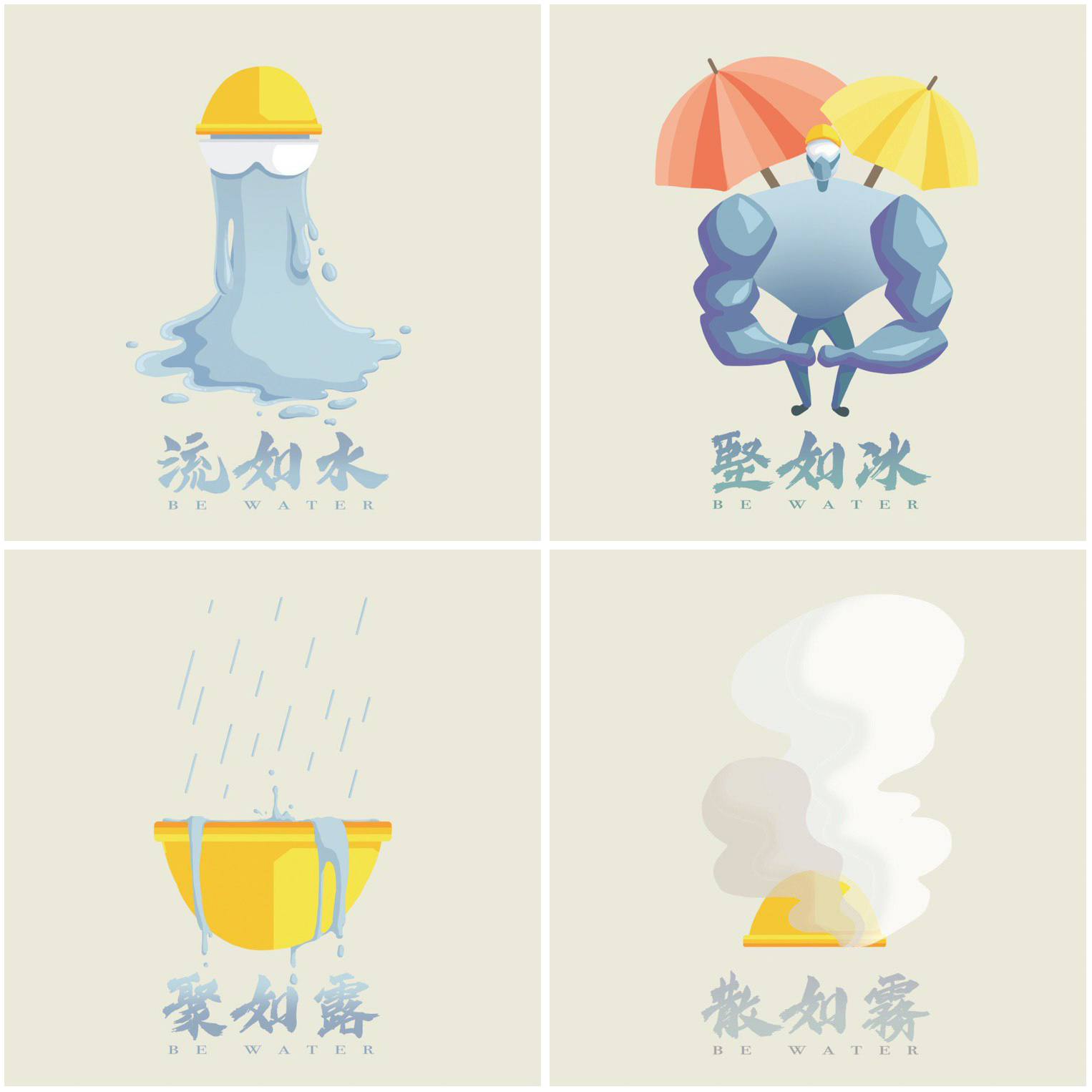 A collection of “Be Water” graphics, inspired by a saying by the late martial arts star Bruce Lee. It is one of the mantras of the Hong Kong protests, encouraging people to adopt tactical fluidity and come and go from protests as needed. Source: Telegram 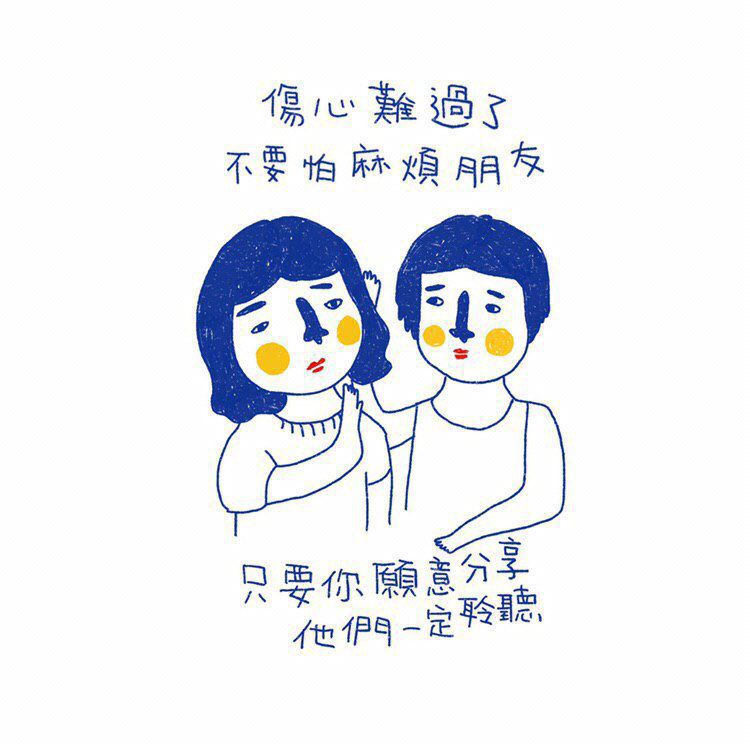 A graphic urging people to take care of their mental health. It says “if you’re sad, don’t worry about troubling your friends. If you’re willing to share, they’re willing to listen.” Source: Telegram

Most members of the protest creative community are known to each other only by their online identities. Phesti made up his nickname by simply shuffling letters he uses for different online accounts. “Just like how front line protesters wear helmets, goggles and face masks, this name is my mask,” Phesti tells TIME. “I hope that one day, I too get to tear off this mask … and meet everyone.” 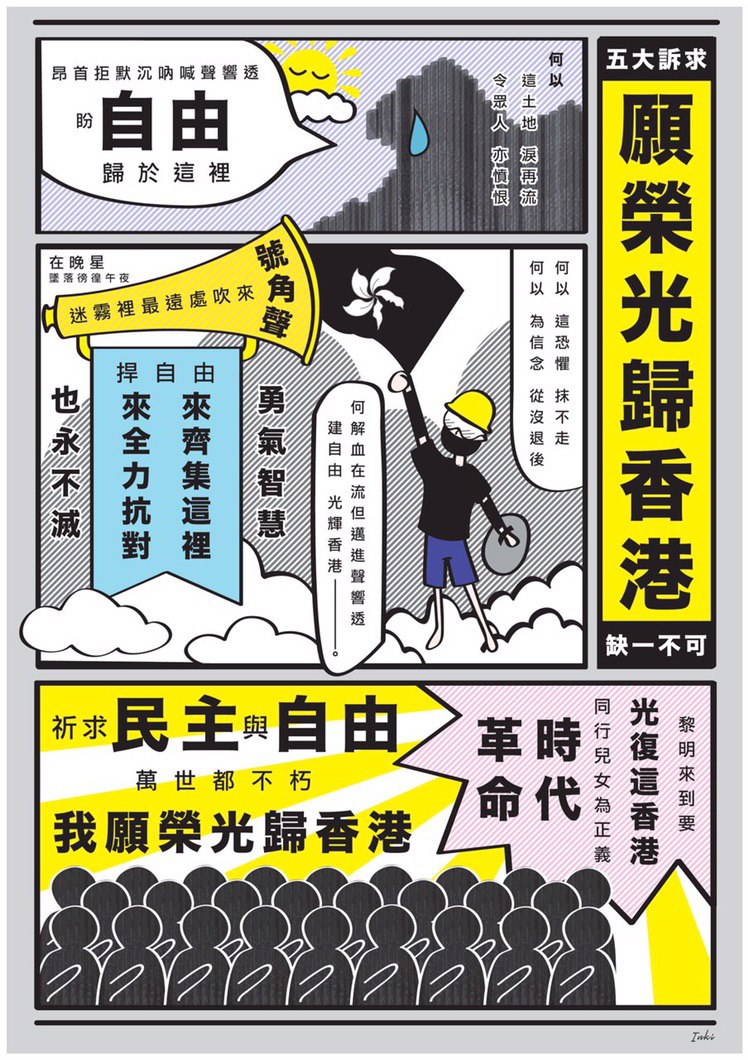 A poster with lyrics of ‘Glory of Hong Kong,’ the new protest anthem. Source: Telegram 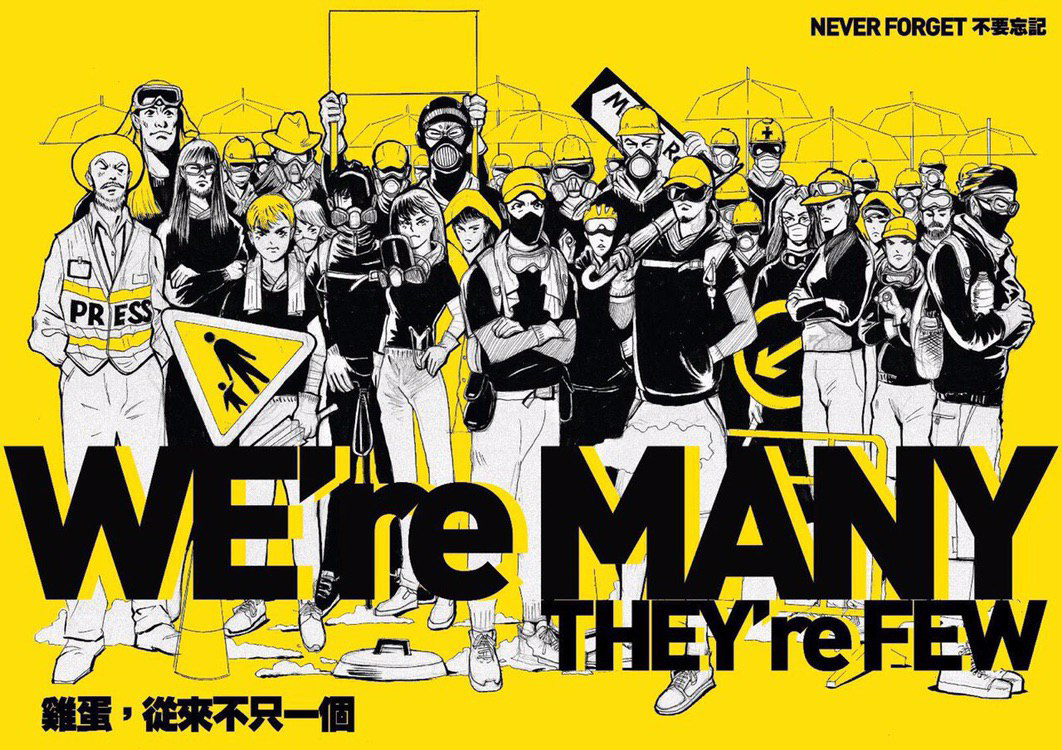