It is a time of rebellion. Thousands of Thais are marching in the streets in defiance of the establishment, which has enlisted every available apparatus to quell young protesters challenging an idea of Thainess defined by the trilogy of the nation, religion and monarchy. Thai Buddhist institutions have good reason to be enrolled in the fight. Yet its members are demonstrating together with angry lay compatriots. The activism of young monks is impressive. Contrary to the conventional view that monks are detached from worldly sufferance, these progressive monks are aware of the Sangha’s role in upholding the status quo and injustice. They want to reinterpret the role of the Sangha anew to serve the people and be the voice of public morality.

Since its conception in 1902, the Thai Sangha, the official order of Thai monks, has been a faithful ally of the Thai state. In exchange for special recognition and patronage, it loyally supplies the state with legitimacy and endorsement. Most notably during the Cold War, when military governments were waging war on communism, the government of Field Marshall Sarit Thanarat asked the Thai Sangha to preach not about sufficiency but more materialistic sermons as a capitalistic antidote to blossoming communism. Sarit also sent convoys of monks into rural areas to mark the presence of the Thai state and convert hill tribes and rural farmers. Amulets were specially made and given to police and soldiers fighting at the front line.

Perhaps the most famous incident was Phra Kittivuttho’s remark that killing a communist was not a sin, interpreted as an endorsement of the right-wing militia’s massacre of left-leaning university students at Thammasat University on 6 October 1976. But Kittivuttho may not be an anomaly, as onlookers often label him. Thai Buddhism has always endorsed the state’s violence when that violence is invoked for “righteous” objectives defined by the government. In the Thai-Lao border conflict of Bann Rom Klao, Phra Panyananda Bhikhu expressed his support for the soldiers fighting for the nation. After the 2010 red shirt crackdown, Phra Maha Wutthichai Wachirametee tweeted that killing time was more sinful than killing a man.

What happens when the Sangha fails to show its support? When Abbot Phra Thep Moli objected to His Majesty’s decision to join the First World War in an anti-war sermon and condemnation of the soldier profession, King Vajiravuth demoted him.

On 30 October 2020, the Sangha Council, the governing body of the Thai Sangha, issued a resolution forbidding the use of temples as venues for political expression. The Sangha Council also reminded monks that monks and novices are not allowed to participate in political protest. Nor can they write openly about politics. These restrictions are based on the pretext that the spiritual realm shall remain separate and above the mundane realm, to maintain the flawless image of the holy men.

Yet other resolutions contradict this image of neutrality. Another commanded that monks preach sermons to raise awareness and love of the nation, religion and king. Many units of the Border Patrol Police, brought into Bangkok as riot-control forces, are staying in temples. Moreover, the government is encouraging civil servants and ordinary Thais to join religious services every Saturday to pay homage to the late King Bhumibol and wish for the betterment and unity of the nation.

In sum, the Thai Sangha is supplying the state not only with spiritual endorsement but also logistical support. It is not and has never remained neutral in political conflict.

The Sangha Council resolution forbidding monks to join political protests and make political statements has been around since as early as 1974. The fact that it has to be restated from time to time suggests that monks are actually very active politically, sometimes in opposition to the government. The spirit of resistance among monks can be traced back to the Religious Restoration Movement in 1934 which requested the People’s Party, the revolutionary party, amend the 1902 Sangha Council which they deemed unfair and undemocratic. This activism was suppressed under decades of military dictatorship but returned in recent years as political conflicts intensified.

In 2010, many monks joined the red shirt rallies in support of Thaksin Shinawatra while others joined the yellow shirts on the anti-Thaksin side. The sight of monks and novices in a mob has not been uncommon this year either. On 16 October, when riot police used water cannons on protesters, one novice was seen begging the police to stop, to no effect. In the aftermath, more monks and novices have come out. Some simply stand amid the crowd but others speak on stage. Most recently, on the night of 8 November, young monks were seen in a crowd marching to the royal palace to present letters asking the king to reform the monarchy and relinquish some of his power.

The scene of holy men in a mob generated a nickname, ไอ้ต้าวแก๊งแครอท, (ai-tao or carrot gang). Carrot refers to their bright orange robes; ai-tao, meanwhile, is more difficult to explain. It is a term of endearment for cute male characters, often in yaoi or East Asian LGBT culture. The closest equivalent, though imperfect, might be bae or cutie—a gang of carrot cuties. Some monks marched with orange flags featuring pictures of carrots. 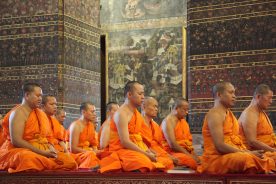 Thailand’s military government has passed an amendment to the Sangha Act that places the power to appoint and remove the twenty members of the Sangha Council, the highest governing body in the Thai Buddhist order, under the king’s power.

While the Sangha Council benefits from the state’s patronage, individual monks suffer. Patronage may bring titles and rewards to those at the top, but this relationship subjects the Sangha to heavy regulations and cripples its autonomy. One major incident concerned the appointment of Sangha Raja, the supreme patriarch, where the government of Prayuth Chan-ocha blocked the nomination of a candidate affiliated with the Dhammakaya sect, which conservative factions hold as heretic. The conflict escalated into a number of confrontations, sometimes physical. Finally, military forces stormed the Dhammakaya Temple and a new candidate was chosen via royal intervention. Many monks who admire the popular Dhammakaya Temple were deeply upset. During the clashes, monks were arrested or treated harshly, a further insult to the saffron robe for many onlooking monks.

The concerns of protesting monks go beyond titles and trophies. Many are genuinely sympathetic to the cause of their lay compatriots.  Their placards call for reform of the sangha law, the archaic law which created the highly centralised, authoritarian Sangha Council that leave no room for younger monks to voice their opinions. Some are demanding more political rights. In Thailand, monks are disenfranchised in order to upkeep their holy status, but many monks feel that being deprived of political rights perpetuates injustice and suffering. They want freedom to publicly express their political views and share the lay protesters’ resentment with socio-economic inequality. In an interview, one novice professed to being ordained to access free education from the monastery. If politics was more representative and the distribution of resources more equitable, every Thai could have access to decent public education.

The protesting monks question the Sangha Council’s silence toward radical right-wing monks but relentless effort to suppress democratically minded ones. Why was a ban on political involvement extended only to the democratic side but not the royalist camp? If a monk can praise the king, he can pray for the people too, said one monk. Some go as far as supporting the idea of secularism, separating the state from religion and retaking control over their monastic order from the crown.

Activism comes at the price, unfortunately. The Sangha Council and the government of Prayuth Chan-ocha do not take kindly any act of belligerency. Each monk must register residency at a temple and is subject to the supervision of the abbot, who reports to the regional, then provincial, and ultimately, central Sangha administration. The Sangha Council works closely with the National Office of Buddhism under the Office of the Cabinet. When a picture of a novice present on the night of 16 October went viral, he came under pressure from his abbot to be expelled and disrobed. One monk who criticised the government and monarchy became the target of a witch hunt by right-wing online vigilante groups. Authorities then charged him under the Computer Crimes Act, a substitute for the notorious Section 112, the lese majeste law, of the Penal Code. He has fled the country since then. The government and the Sangha Council vowed to track and punish any monks who participated a protest.

At present, Thailand is attempting to redefine its relationship with the king. The essence of the protests is the debate about what a “democratic regime with the king as the head of the state” means exactly. But the next challenge, perhaps even bigger, is defining the state’s relationship with Buddhism. There is growing evidence of the rise of Buddhist nationalism against pluralism and democracy. This radicalism is spurred by the Sangha’s fear of decline and younger generations finding no relevance in the faith and, therefore, abandoning it.

The solution, according to the view of many conventional Buddhists, is to call for the establishment of Buddhism as an official state religion. In other words, they demand a democratic regime with Buddhism as the state religion. Their wish would no doubt ensure religious conflicts similar to that in other Theravada Buddhist countries such as Sri Lanka and Myanmar. Young liberal monks, the gang of carrot cuties, could perhaps be the frontline defence against such fanaticism. They can give obsolete Thai Buddhism new life and restore the public’s respect for their moral sacrifices.