A Tale of Two Rosies

Comedian Rosie O’Donnell and and comic actress Roseanne Barr have been at extreme opposite ends of the anti-Trump/pro-Trump spectrum. Both are comics, middle-aged white women who even look something alike, so much so that Twitter-denizens often get them confused.

But Rosie O’Donnell (Rosanne) has been a vociferous critic of Trump and his administration. She promoted a ‘kill Trump’ video game called ‘Push Trump Off a Cliff Again’. She often tweets messages in ALL CAPS and offered a bribe to two Senators to vote against the GOP tax bill. She also creates provocative images that lambaste Trump. Early in 2017, she dressed herself in drag to look like Steve Bannon, and photographed herself as Bannon with ‘dummy Trump’ sitting on his lap. It appeared at the time that she was auditioning for a spot on SNL as a Bannon impersonator, which never transpired. Her Bannon impersonation was so good that even I didn’t know it was Rosie O’ until I read it elsewhere. Recently she posted a collage of some of her anti-Trump images.

Rosanne Barr, on the other end, is a fervid Trump supporter. She has exhumed her role as a working class mom in a revival of the “Roseanne” sitcom, with some of the original actors (including ‘husband’ John Goodman). Barr is using the show on social media to boost her pro-Trump propaganda and her belief in bizarre ‘Infowars’ style conspiracy theories. The show’s opening episode shows her arguing about Trump with her sister, who voted for the Green Party’s Jill Stein. As the family sits down to dinner, she offers thanks for the meal and for ‘Making America great again!”

Rosanne has been a passionate supporter of Trump’s policies, and claims that ‘liberal elites don’t like it because its good for the working class’. But Roseanne’s extreme racism is evident in her provocative statements and images. She’s clearly one of Trump’s white supremacist supporters, as one can see from these self-constructed photos: 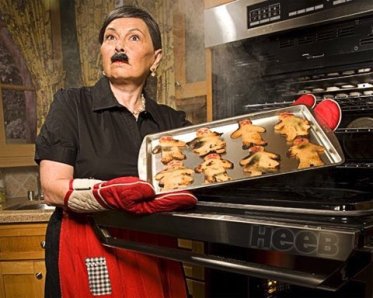 One might question whether the Hitler photo really is Roseanne Barr or did someone photoshop her face onto another poseur. As proof that it’s really Rosie, Entertainment Magazine issued this statement:

Both women personify the kind of political paranoia that is in motion on both ends of the political spectrum, with Rosie O’Donnell an extreme anti-Trump partisan and Roseanne Barr and extreme pro-Trump partisan. Rosie O’Donnell has had to ‘take a break’ from Twitter in the past year, complaining that the whole Trump-Republican circus was making her mentally ill. Roseanne Barr has been criticized for her conspiracy theories as delusional and mentally unstable. Both Rosies are a symptom of the extreme polemics cooked up in this roiling stew of social media politics.