Chillin’ at the Buddha Bar 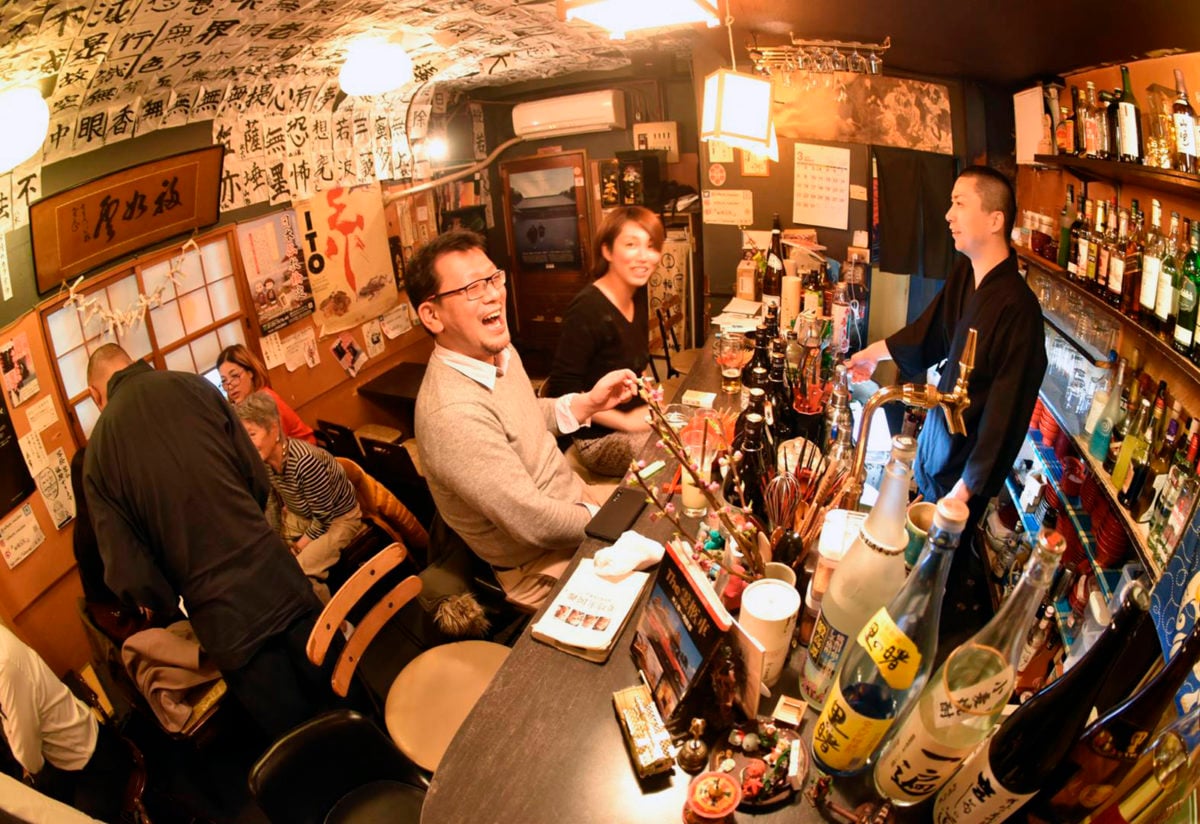 In this March 5, 2020 photo, customers laugh at the Vowz Bar, run by Buddhist priests, in downtown Tokyo. Buddhism suffers from a gloomy image in Japan given its close link to funerals, but some younger priests are trying to rejuvenate the religion by making it more appealing and relevant to daily life through activities such as traditional story-telling, contemporary music, TV show appearances, counseling people considering suicide and hosting customers at such “monk bars.” (AP Photo/Malcolm Foster)
Malcolm Foster June 12, 2020

TOKYO (AP) — Buddhism suffers from a gloomy image in Japan. It is so closely linked to death — funerals, graves and memorial rituals in which priests chant sutras based on Chinese rendering of Sanskrit texts that no one else understands — that people refer to it as “funeral Buddhism.”

The powerful forces of secularization and population decline have caused the religion to steadily wane in Japanese society, with disinterest in Buddhism — and faith in general — particularly pronounced among the young.

Buddhist leaders say a third of the country’s 75,000 temples are barely functioning, with rural flight hurting the traditional “danka” system of financial support by parish households, to the extent that some country temples have closed and priests are taking second jobs.

Meanwhile, intensifying competition from discount funeral businesses and nonreligious cemeteries has cut into income from the death rituals and grave plots.

But a younger generation of priests is working to reverse the faith’s downward spiral, innovating to try to make Buddhism more appealing and relevant to daily life and the modern world.

“We need more priests to be aware of the needs of people around them and how to maintain the temple not as a business but based on Buddhist teachings,” said Yoshiharu Tomatsu, secretary-general of the Japan Buddhist Federation, an umbrella group overseeing the country’s 58 sects. “Otherwise, we have no reason to exist in this society.”

Buddha in a bar

Since most people don’t have much opportunity to interact with Buddhist priests, 43-year-old Yoshinobu Fujioka spends evenings in downtown Tokyo at his Vowz Bar, a play on “bouzu,” Japanese for monk.

The watering hole typically sees 100 customers crammed into two small second-floor rooms on weekend nights — or at least it did until the coronavirus pandemic hit. A Buddhist altar sits in the corner while jazz music plays in the background.

Unlike Buddhist priests elsewhere, those in Japan can marry, drink alcohol and eat meat, thanks to an 1872 imperial edict. Sharing cocktails in a cozy atmosphere encourages people to open up about their struggles, Fujioka said.

Twice a night he spends 15 minutes leading customers in chanting sutras, followed by a short talk or story. One evening in March, amid the growing pandemic, he talked about non-financial ways of giving alms, such as looking kindly on people, smiling and paying attention to those in need.

“Lots of young people come and listen earnestly,” said Fujioka, who also performs with a band in live clubs. “Buddhism gives wisdom for living. Everyone is starving for truth. Hearts are dry. … If we offer that to people, they will soak it up.”

Haruka Umeyama, a 30-year-old tour guide, described herself as “a typically religiously confused Japanese” who didn’t know much about Buddhism but felt at home at Vowz.

“I came here and it’s great,” she said. “They make the words of Buddha easy to understand. And for some reason, even though I wasn’t brought up religious at all, some of the things they say here make sense.”

Setting the sutras to guitar

Kanho Yakushiji, a 41-year-old Zen Buddhist priest from the southern island of Shikoku, grew up loving music and formed a band in his 20s because he didn’t want to inherit his father’s temple, as is typical in Japan. “Music was kind of an escape for me,” he said.

But he gradually began exploring his Zen roots, which emphasize meditation and discipline, and realized he needed to confront his fears about becoming a priest. At 30 he entered a two-year training regimen at a Kyoto temple that included grueling cross-legged meditation sessions lasting for hours.

Yakushiji emerged convinced he wanted to incorporate music into his ministry. Today he’s recorded three solo albums and has toured Japan, China and Taiwan, playing his guitar in his priestly vestments, his head shaved.

His early songs were pop or folk tunes about family, friends and his hometown. Most didn’t contain explicit references to faith but were more subtle: “Treasuring the important things in life and Buddhist teachings are really one and the same,” he said.

Lately Yakushiji has been experimenting with a different and distinctly Buddhist sound: harmonized sutras chanted to dreamy guitar chords. His recent arrangement, “Heart Sutra,” has garnered 2.8 million views on YouTube.

“Buddhism has done little to spread,” Yakushiji said. “But now young priests are reaching out in a lot of different ways, so I think things are changing.”

Like the other priests interviewed for this story, 37-year-old Naoyuki Ogi of southern Yamaguchi prefecture said he spreads Buddhist teachings because they offer practical help in daily life and ultimately a roadmap to nirvana, or enlightenment.

Among such core tenets are the importance of self-reflection and self-improvement, as well as awareness that all living things are connected. Another is the idea that one’s ancestors protect and help the living and can be prayed to or even worshipped.

Ogi goes on TV shows to promote those and other teachings, and also works at the Society for the Promotion of Buddhism, which distributes copies of “The Teaching of Buddha” in hotel rooms.

“My primary purpose is not to convert people to Buddhism or expand my temple’s members,” said Ogi, whose temple danka has shrunk to 110 families from 150 about 20 years ago. “My main goal is, how do I introduce Buddhist teachings to people? Because they are so useful.”

Unlike Christianity and Islam, mainstream Buddhist groups in Japan generally don’t seek converts, although some offshoots are zealous about proselytizing.

Religion is a flexible concept anyway for most Japanese, who often mix Buddhism with Shinto, the indigenous worship of spirits in nature, or even Christianity. Many people dedicate their children at the local Shinto shrine, tie the knot in Christian weddings and hold Buddhist funerals, without considering any of that contradictory.

That makes it hard to pin down religious affiliation. Government data based on tallies from temples and shrines shows Japan is roughly split between followers of Buddhism and Shinto, with some people counted in both camps. But when Japanese were asked to pick one religion they believed in, in a 2018 survey by the International Social Survey Program, 31 percent of respondents said Buddhism, 3 percent Shinto, 1 percent Christianity — and 62 percent no religion at all.

For Ogi, creed doesn’t matter when it comes to his ministry.

“Even if you are a Christian, and you like Buddhist teachings, please use them,” he said. “No problem.”

Tsuyuno Maruko, a 33-year-old priest in the Tendai sect, found her niche in the often humorous storytelling tradition called “rakugo.” In one story she likens various Buddhist “hotoke,” or godlike figures, to shopkeepers on a street, noting how each has a store serving different needs.

Maruko is among those abandoning the danka system. She’s building a new temple in the southwestern Hyogo prefecture modeled on a Christian church and supported by visitors’ contributions and her own storytelling performances.

“I think many Japanese view religion as something suspicious or a bit dangerous,” she said. “We need to communicate that faith is part of everyday life, just like eating our meals.”

Maruko, whose husband is Christian, said many priests are either complacent or too inwardly focused on whether their temples will survive.

“That kind of preoccupation with one’s own livelihood seems to have lost sight of the essence of religion,” she said.

That was going to be the gist of her message to fellow priests at an April seminar on addressing the “crisis” facing Buddhism, but it was postponed due to the pandemic. She still plans to drive home the point that “you should not be working for yourself but for others.”

Ittetsu Nemoto, 48, had no interest in religion as a youth. By his own account, he partied hard, danced all night and “was kind of a delinquent.”

But he practiced Buddhist meditation as part of his karate training, believing it helped him discern opponents’ moves. After a motorcycle accident sent him to the hospital, Nemoto began questioning his life, felt empty and decided to become a Zen priest.

Around that time, about 15 years ago, Japan saw a surge of suicidal people meeting online and then taking their lives in small groups, often through carbon monoxide poisoning in sealed vehicles. Nemoto, who had lost an uncle and two former classmates to suicide, began seeking them out through the internet and going to talk with them.

“After sharing their stories, they would become friends and give up their suicide plans,” he said. He created a web-based support group to keep in touch with them.

By the time Nemoto became chief priest of a small temple in central Gifu prefecture, he had a reputation as a suicide counselor. Over the next several years, he counseled thousands of people by phone, in person and in small groups.

He developed a workshop, depicted in the 2017 documentary “The Departure,” with mock funerals that force participants to confront their own death. In one activity, people are asked to write down things they hold dear, helping them see what they would be giving up.

Nemoto farms to help support his family. And while he doesn’t want his 700-year-old temple to close, he is a staunch believer in reorienting ministry, perhaps around technology instead of the temple.

“Outside needs are growing and temple needs are declining,” Nemoto said. “With just your smartphone, you can do almost anything. Buddhism needs to think about how it will function in that world.”

“Buddhism saved me from a messed-up youth and helped me see things clearly,” he said. “If it can’t be used to save people from death, it has no value.”

Associated Press religion coverage receives support from the Lilly Endowment through the Religion News Foundation. The AP is solely responsible for this content.