Engaging with Love: A Culture of Care

Engage with Love is the focus for my own practice as a Buddhist activist and as editor of this blog, with compassion for all, including our so-called ‘enemies’. I espouse the Revolutionary Love ethic, because what I see missing from most of the social justice movements I have been involved in is a lack of love, expressed in a pragmatic way as care and compassion for all. I recently published the Care Manifesto, signifying a shift in emphasis from an ethic of social justice ‘righteousness’  to a justice of care for all.

Capitalism, Socialism, Democratic Socialism, Communism, Green Technocracy: whatever form the ‘system’ takes, it almost universally does not prioritize caring for all as its paradigmatic value. Though I have a preference for Democratic Socialism, particularly the communitarian form proposed by Murray Bookchin, I am no longer persuaded by ‘democracy’ alone, or ‘socialism’ alone, or  ‘green efficiency’ alone, or by the operational values of other systems as proposed and practiced.

I want to create a system of care, a cultural, political and economic system that prioritizes care above all else: caring for the most vulnerable, caring for all human beings with equity and justice, caring for all living species and caring for the whole environment. It’s a difference of values rather than a difference of operations. A socialist or communist worker-focused system could be a system of care for all workers, their wages, conditions and quality of life. But more often, whether capitalist, socialist, green or communist, it becomes a system of worker exploitation. The aim of these systems is to produce profits (capitalism) or efficiencies (communism, green), but it is not a system that prioritizes caring for the whole lives of workers.

If the coronavirus has shown us anything in the last six months, it’s that we can do without the latest smartphone, the cheap junk we buy at big box stores, distant vacations and eating at restaurants. We have a serious shortfall in what is really necessary to survive and thrive: nutritious food, housing, health care (including mental health and environmental health), education, spiritual development, culture and community. These areas of life are traditionally the concern of women and feminists, undertaken by the feminized work force for the lowest wages with the worst job security. The caring work of women and communities for children, the sick, the elderly, the marginalized and the vulnerable, is the most devalued work in most societies. Caring for the environment and for all living species is not even counted in these systems; they are treated as “externalities.”

A culture of care necessarily deflects ‘call-out culture’ and ‘cancel culture’, which is all too prevalent in social justice circles; rejects the justification of hate, revenge and violence, racism and misogyny; and rejects all forms of state-sanctioned violence against vulnerable populations.

I want a system, whatever its operational form, to prioritize care over profits, security or efficiency. I’ve been thinking about this for a while, but these thoughts came together after receiving the following email from Massachusetts Peace Action. Because a shift toward an ethic of care for all necessarily requires a strategy of nonviolence, conflict resolution and peace. 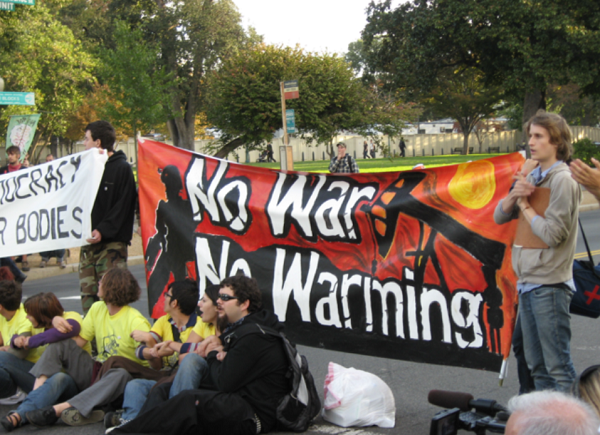 A webinar with Lorah Steichen from the National Priorities Project

In the face of both COVID-19 and the climate crisis, we urgently need to shift from a culture of war to a culture of care. Funneling trillions into the military to wage endless wars and project military dominance has prevented us from investing in true security and cooperation.

In No Warming, No War: How Militarism Fuels the Climate Crisis and Vice-Versa, we lay out how militarism and the climate crisis are deeply intertwined and mutually reinforcing.   Register now!

The military itself is a huge polluter — and is often deployed to sustain the very extractive industries that destabilize our climate. This climate chaos, in turn, leads to massive displacement, militarized borders, and the prospect of further conflict.

True climate solutions must have antimilitarism at their core.

Lorah Steichen is the Outreach Coordinator for the National Priorities Project at the Institute for Policy Studies. In this role, Lorah produces research and analysis on the intersections of militarism and the climate crisis and supports movement building focused on shifting our war economy to address the climate crisis. Prior to IPS, Lorah worked as an organizer, researcher, and writer for the NAACP Environmental and Climate Justice Program.

To view all of Mass. Peace Action’s past webinars visit our Youtube page.

Visit our website to learn more about joining the organization or donating to Massachusetts Peace Action!

We thank you for the financial support that makes this work possible.

One comment on “Engaging with Love: A Culture of Care”