The strategies of Hong Kong protesters, honed through weekly clashes with police, offer a masterclass to activists worldwide.

For almost two months, a wave of anti-government protests have rocked Hong Kong. Initially sparked by a government proposal to introduce a law that would allow the extradition of criminal suspects to stand trial in mainland Chinese courts, the protests have morphed into a broader pro-democracy movement, demanding greater government accountability and universal suffrage. Protests have largely been driven by young activists, who have developed and adapted their strategies during weekly protests and clashes with police, offering a masterclass in protest for activists worldwide. Here are some of their key tactics.

No more occupying – “Be Water!”

The worldwide “occupy” movements following the Global Financial Crisis of 2008 served as the inspiration for Hong Kong’s previous mass act of civil disobedience – a series of protests known as “Occupy Central” or the “Umbrella Movement” – in 2014. These protests adopted the “occupation” logic of the prior movements, with protesters occupying the city’s main thoroughfares for 79 days in the hope that the disruption would force the government to the negotiating table. The government refused to budge, and the protests ended in failure.

This time around, Hong Kong’s protesters are taking their inspiration from a source closer to home: local hero, kung-fu movie star Bruce Lee, who famously advised: “Be Water”.

Hong Kong’s young protesters are eschewing the fixed, immobile occupation strategies of the past, in favour of a highly mobile, agile style of protest. A rally may turn into a march; a march may begin in one direction and abruptly change to another direction; the focus of a particular protest action may only emerge in the course of the march itself. In recent protests, small sub-groups of protesters dispatched themselves to carry out targeted “wildcat” occupations of a government building, flooding the entrance lobbies, escalators and lifts. When the government declared the building closed and dismissed staff for the day, the protesters dispersed and moved on to their next target. As Bruce Lee said, “Water can flow, or it can crash!”

The current wave of protests in Hong Kong is leaderless. This is partly a response to the Hong Kong government’s aggressive prosecution of past protest leaders: Umbrella Movement figurehead Joshua Wong was only recently released from prison, while many other leaders including the initiators of the Occupy Central plan, Benny Tai and Chan Kin-man, remain behind bars. With no obvious leader, there is no one to imprison.

But the lack of a centralised leadership is also a result of the online, organic tactics. Protesters use online forums such a LIHKG – a kind of local, lo-fi version of Reddit where users comment and vote on posts – as well as Telegram chat groups (the larger among these have tens of thousands of members), where the poll function enables participants to vote on next steps: should the protesters stay on or disperse? Protesters vote on the spot, and act accordingly.

Professor Francis Lee of the Chinese University of Hong Kong has called it “open-source” protest. Volunteers with megaphones or walkie-talkies help to announce and coordinate, but they are not “leaders”. Protesters have also explained that this lack of leadership encourages everyone to get involved and contribute to the movement. In this way, the protesters are enacting the kind of participatory democracy they would like to see.

The protesters’ use of Telegram is well-known, and so it was perhaps not a surprise that during the most intense early clashes between protesters and police, Telegram reported that it had been subject to a distributed denial of service attack originating from mainland China. Add on top of this the massive overload of mobile networks when tens of thousands of people are standing in the same small area trying to access their devices simultaneously, and communications can quickly become unreliable. In response, protesters have turned to alternative peer-to-peer technologies, in particular the “AirDrop” feature that every Apple phone is equipped with (AirDrop enables iPhone users to send images to each other over BlueTooth connection, without the need for a mobile connection).

Protesters have used AirDrop both to share messages with participants in the course of protests, and to spread the word among a broader community. Commuters on Hong Kong subway system may find themselves receiving unsolicited AirDrop messages with slogans promoting the protesters’ cause or advertising the next rally. Prior to protests, Telegram chat groups carry the reminder “Remember to have AirDrop switched on!” Towards the end of a recent protest, as the protesters were preparing to again “Be Water” and disperse together, my mobile phone suddenly began to ping with AirDrop requests carrying the simple message: “Leave together at 7:00.”

A sign is passed onwards through the crowd back to the supply depots where goods have been transported near to the protest site, and the requested items are then passed through the crowd along a human chain back to where they are needed. These human supply chains have stretched as far as a kilometre in length, and are an impressive sight to behold.

A VIDEO THREAD: How did HK protesters use hand signals & human chains to get supplies quickly to front lines on Monday? Here, they need more helmets at the front line at LegCo doors. What to do? The hand signal for “helmets” is passed from the front line through the crowd… 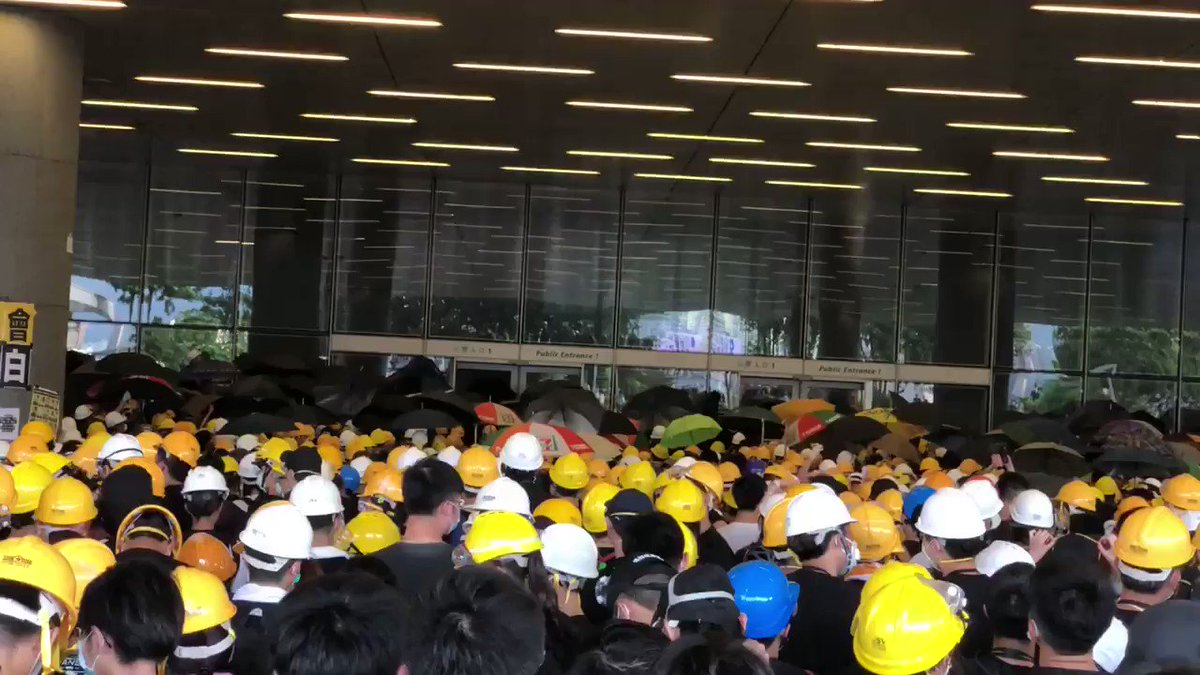 2,410 people are talking about this

This sign language has become so iconic that on a recent “silver haired” rally of elderly Hong Kongers marching in support of the young generation, the elders were learning and practicing the youngsters hand signals in solidarity.

The young people are handing out crackers and water to the elderly folks marching. In return elders are telling the young folks to stay safe. 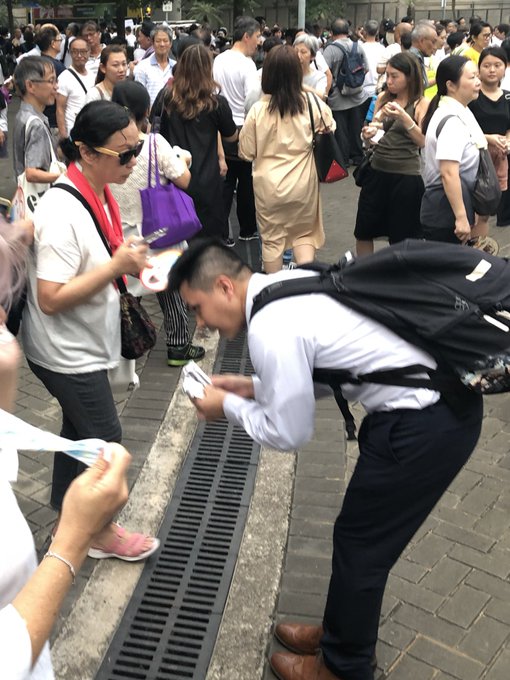 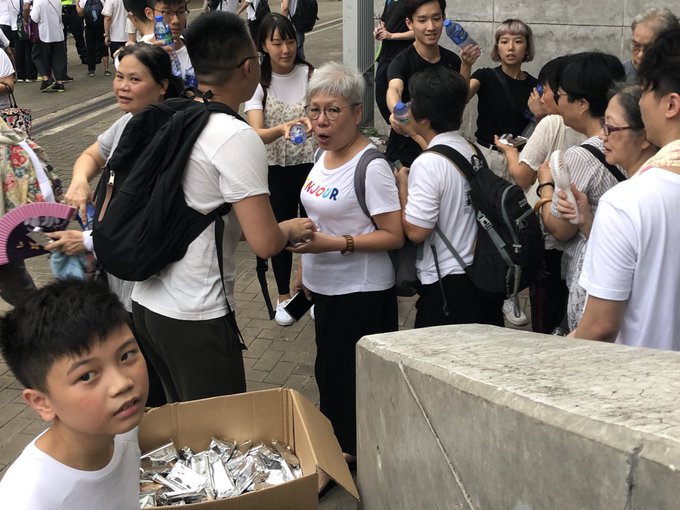 Teaching the elders how to do the youngsters’ protest sign language. All the elders joining in. 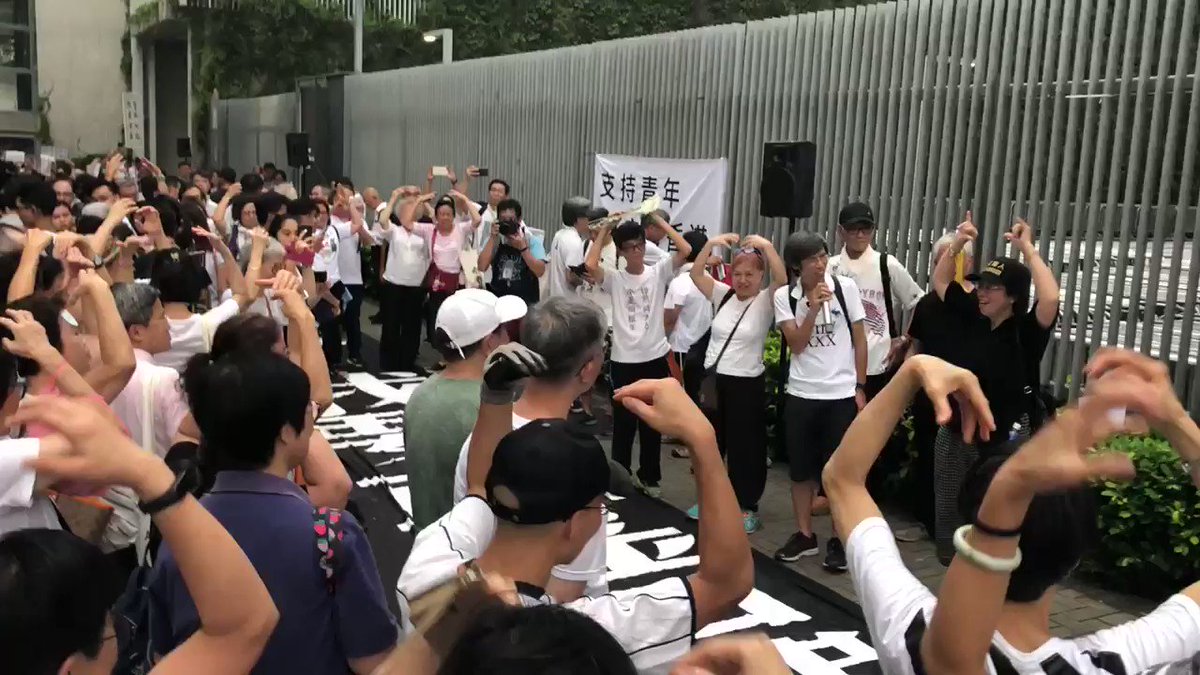 499 people are talking about this

When police fired tear gas on protesters at the beginning of Hong Kong’s Umbrella Movement protests of 2014, it caused widespread outrage across the Hong Kong community and helped spark the 79-day occupation of the city. Fast-forward five years, and the deployment of tear gas on Hong Kong’s streets has become all-too commonplace. Indeed, over the past weekend alone tear gas was fired by police in dense, residential neighbourhoods on both Saturday and Sunday, and on Sunday evening almost constantly over a period of some four hours. Part of the reason for the increased amounts of tear gas is that protesters have learned how to neutralise it.

Small mobile teams of “firefighters” wait at the rear of the front lines equipped with traffic cones. When a tear gas shell lands among the crowd, they race in to cover the shell with the traffic cone, creating a “chimney” that contains and funnels the smoke away. Another team member then moves in to pour water into the cone to douse the shell, putting it out. When a traffic cone is not available, water or wet towels are used to smother the tear gas shells, or a nimble protester wearing heat-proof gloves will snatch up the shell and throw it, either back at police or to the side of the crowd out of harm’s way.

THREAD: How do HK’s #HardHatRevolution protesters neutralize police tear gas? Last night’s clashes with police in Sheung Wan showed how protester “firefighter” teams work. Here they are in position towards the rear of the front lines & ready to mobilize. Note the traffic cones. 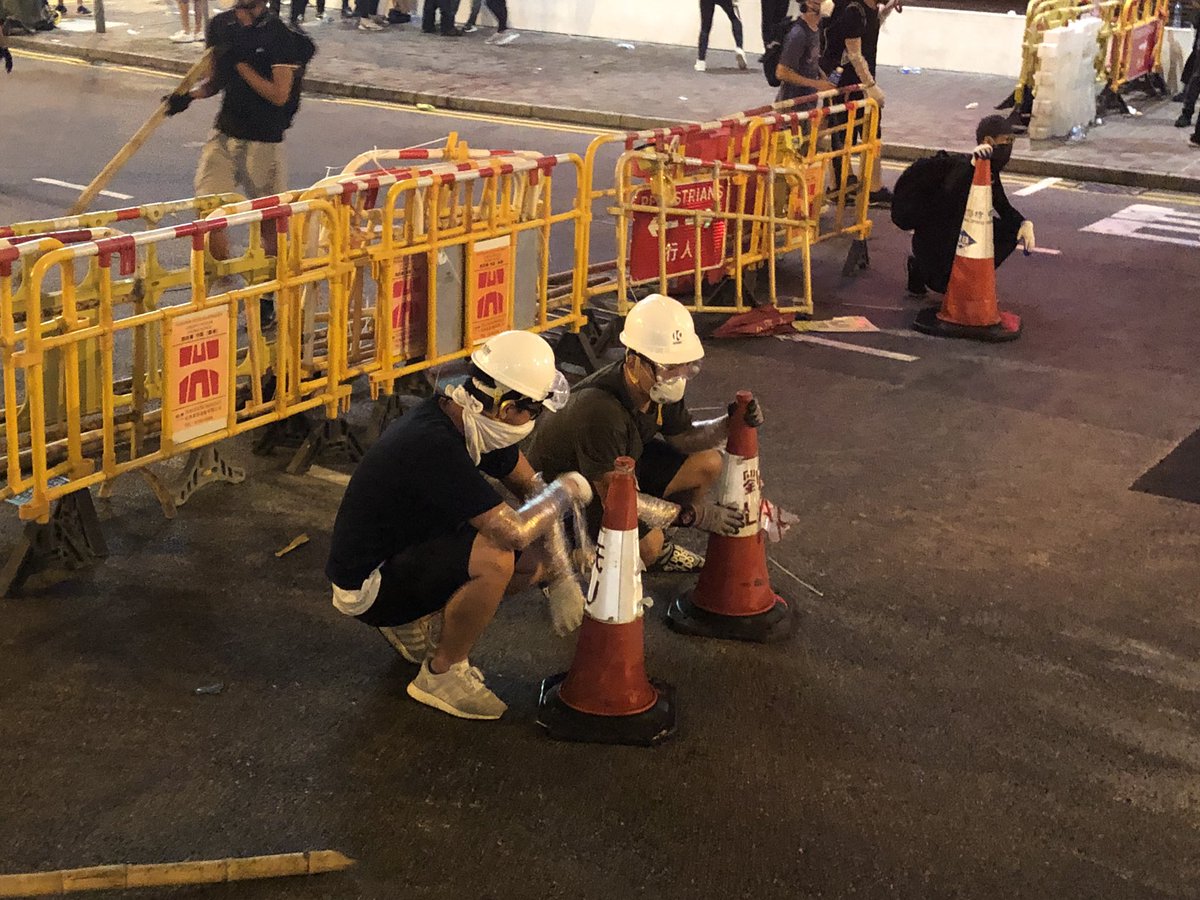 238 people are talking about this

One of the greatest risks of injury or death in a crowd arises from the dangers of a stampede. This threat is compounded by the urban geography of Hong Kong: recent protests have taken place on narrow, winding back streets in the old Sheung Wan neighbourhood, or on mazes of overhead crossings and walkways that are interlaced across Hong Kong. When police fire tear gas into tightly-packed crowds, or the rapid-response “Raptor” police teams launch one of their lightning baton charges, the risk of the crowd panicking – and a stampede forming – is acute.  Aware of these risks, crowds of protesters chant “One, Two, One Two…” in unison as they retreat, and march in time to the count. This ensures the retreat is orderly and avoids what could otherwise become a deadly crush. 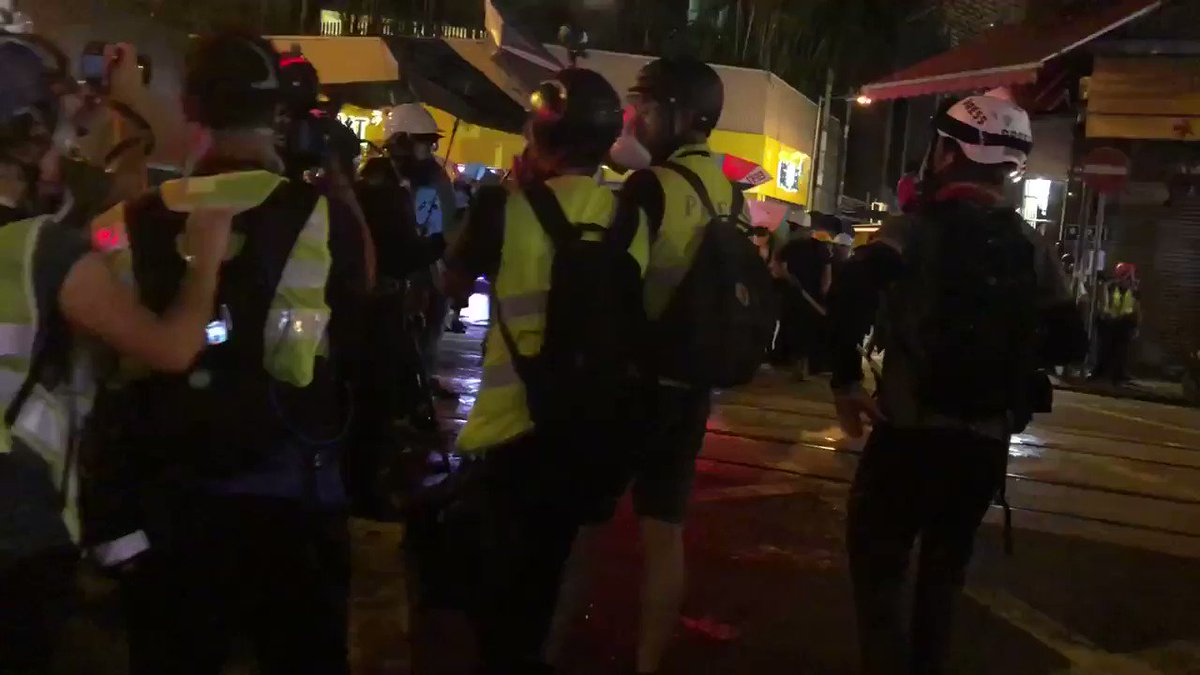 Under fire from police tear gas, the crowd retreats down a narrow side street. To avoid a lethal stampede, they all chant in unison “1, 2, 1, 2…!” and march in time to the chant. 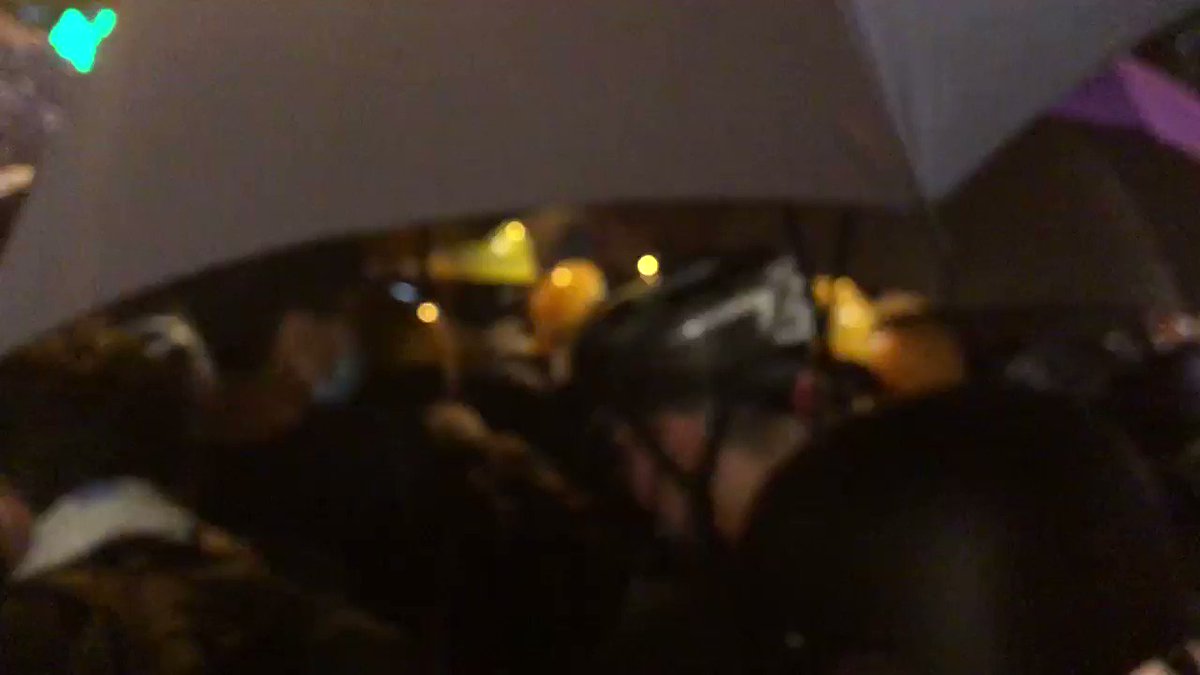 350 people are talking about this

The Revolution will be crowdfunded

Hong Kong’s activists wanted to win international attention for their cause, and saw the planned G20 summit of world leaders to be held in Osaka at the end of June as an opportunity. Though unable to get their struggle onto the G20 conference room tables, they aimed for the next best thing: their breakfast tables. Activists took out a series of full-page advertisements in newspapers across the world to publicise their struggle. They crowdfunded the adverts with a campaign that had raised over £600,000 within a matter of hours. Volunteers prepared and proofed the text in multiple languages, booked the advertising space and delivered the artwork to newspapers across the world. In the days leading up to and during the G20 summit, striking full-page black and white advertisements reading “Stand with Hong Kong at G20” appeared in newspapers across the world, from the New York Times to The Guardian, Le Monde and Süddeutsche Zeitung, The Australian and the Asahi Shimbun, the Globe & Mail and the Seoul Daily.

Antony Dapiran is a Hong Kong-based writer and lawyer, and the author of City of Protest: A Recent History of Dissent in Hong Kong published by Penguin.