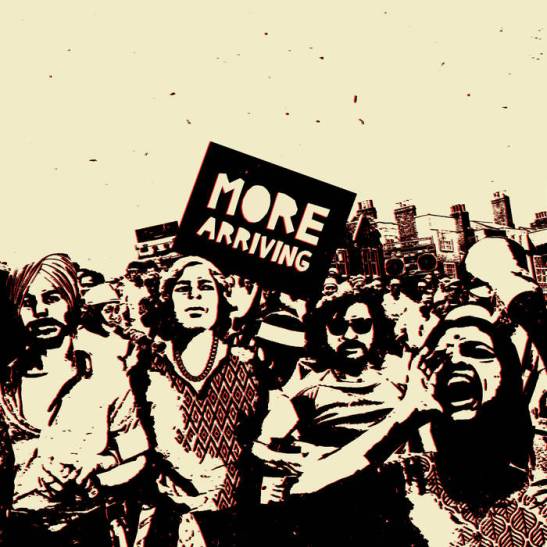 I always knew this was possible. I’ve been waiting for an album like this forever. Indian jazz that swings classical Indian timbres and scales, overdubbed with South Asian poetic rap. The album was recorded in both in India (Mumbai, New Delhi) and the UK. Mindblowing. The project was steered by the drummer Sarathy Korwar. Some nice guitar work too. The theme is the South Asian diaspora in the UK. Check out the videos for several of the tracks.

We live in divisive times. Multiculturalism rises hand-in-hand with racial tensions, and politicians seem powerless to even bring people within earshot of their convoluted message. It’s time for a different perspective.

On his second studio album, More Arriving, Sarathy Korwar blasts out his own vibrant, pluralistic missive for the world to hear. This is not necessarily a record of unity; it’s an honest reflection of Korwar’s experience of being an Indian in a divided Britain. Recorded over two and a half years in India and the UK, More Arriving draws on the nascent rap scenes of Mumbai and New Delhi, incorporating spoken word and Korwar’s own Indian classical and jazz instrumentation. This is a record born of confrontation; one for our confrontational times.

With this album, Korwar expands his politicised narrative to envelop the entire diaspora. “This is a modern brown record. The kind of record that a contemporary Indian living in the UK for the past 10 years would make,”Korwar says. “This is what Indian music sounds like to me right now.” It all begins with the title: “More Arrivingcomes from the scaremongering around Brexit,” Korwar says. “It’s a tongue-in-cheek play on the fact that there are more people coming and you’ll have to deal with it!” Through this defiance, Korwar takes clear pride in the knotty mix of his identity – harking back to the new India of the Mumbai hip-hop kids, as well as identifying with London’s cultural diversity. “I want the idea of brown pride to come through,” he says. “My voice is one amongst a thousand, but this record is a snapshot of something much greater than myself. It’s the chance to send a message.