Wirathu has long been accused of inciting sectarian violence against Myanmar’s Muslims, in particular the Rohingya community, through hate-filled, Islamaphobic speeches.

The monk, who is at the forefront of Myanmar’s radical nationalist movement, supported the military crackdown on the Rohingya in August 2017 in Rahkine state. The UN has since defined the military violence as ethnic cleansing which was carried out with “genocidal intent”. 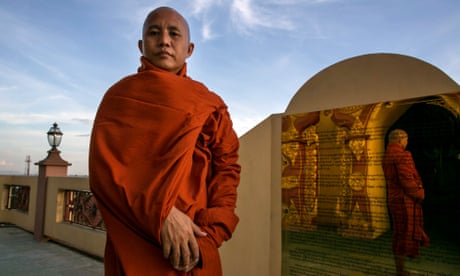 ‘It only takes one terrorist’: the Buddhist monk who reviles Myanmar’s Muslims

The police confirmed on Tuesday that a warrant had been issued for Wirathu’s arrest under article 124(a) of the legal code. It covers sedition, defined as “attempts to bring into hatred or contempt, or excites or attempts to excite disaffection towards the government”. The charge carries a three-year sentence.

It is believed to be connected to defamatory comments made by Wirathu about Myanmar state counsellor Aung San Suu Kyi.

The police were still trying to hunt down the monk on Wednesday. He usually lives in his own compound within the Masoeyein monastery in Mandalay but his whereabouts were currently unknown.

If he is charged, this would not be Wirathu’s first time in prison. He was first jailed in 2003 by the military junta but released in 2012 under an amnesty and began touring the country, whipping up hatred against Muslims with his extremist sermons.

While a senior Buddhist council temporarily prevented Wirathu from preaching, over the past few months he has been a regular feature at pro-military rallies, again stirring up anti-Muslim sentiment by calling for boycotts of Muslim businesses and referring to the Rohingya as illegal immigrants.

He has also been banned from Facebook since January 2018 and he was banned from entering Thailand last month.

While Buddhism espouses non-violence, Wirathu has openly said he is “proud to be called a radical Buddhist” and in a 2013 sermon said of Muslims in Myanmar: “You can be full of kindness and love, but you cannot sleep next to a mad dog.”

Speaking at a rally in October, the monk spoke out against attempts by the international criminal court (ICC) to investigate the crimes against the Rohingya in Rahkine. “The day when the ICC comes here,” he said, “is the day that Wirathu holds a gun.”