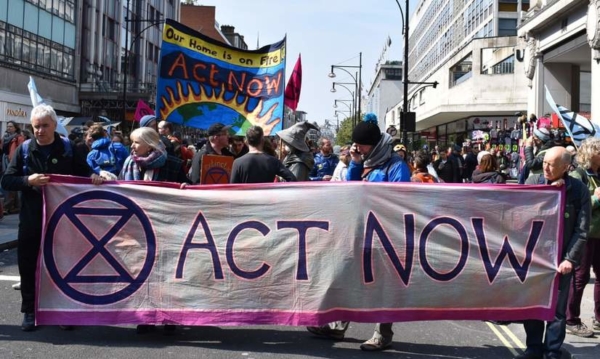 I’d like to spend a few hours inside the head of one of those commuters who faced some kind of disruption to their schedule due to the Extinction Rebellion protests last week. The sheer venom provoked by many of the reactions — cries that the protestors were alienating the very people they should be persuading — reveals the scale of the challenge, but also some of the core features that make climate revolt so worthwhile and necessary.

The daily commute, and the clocked, mechanical understanding of how time should govern our lives, was invented by the form of industrial capitalism that first took root in the British Isles, before it spread, largely through violence, all over the world.

The core appeal of coal as a power source was that it allowed capital to escape from the ebb and flow of nature. The great shift to burning coal, whether in the 19th century Britain or 21st century China, went hand in hand with the need to discipline a regimented workforce. Today, the erstwhile irate commuter cannot be late, because her time has become transformed into economic value.

With this alienation imposed by industrial capitalism seeded two hundred years ago, we can but wonder if there is still deep consciousness somewhere within our wrung out late-capitalist minds that realises things could be different.

With the essential need for an enormous shift away from carbon-burning today, a total reappraisal of what work is for will also be required. Along with single-use plastics and combustion engines, our current concept of work — primarily geared towards expanding levels of economic growth — will have to go. We must work less to save the planet.

This, I think, is one of the reasons why Extinction Rebellion provoked so much outrage and, in doing so, secured substantial attention for their cause. By shutting down key parts of London, a city so central in the industrial system that is heating our planet to breaking point, the message was simple: it doesn’t have to be like this. Millions, no doubt, will have been lost to the British economy as a result, but how do you put a price tag on such a vital message?

Messaging is the first hurdle the movement faces. The man-made climate crisis is a political issue like no other: a challenge so enormous, so fundamental, that it cannot operate within the frame of pre-existing norms of political debate.

On a basic level, communicating the impact of the crisis, after decades of denialism, is notoriously difficult. The current trend, for a rise of 1.5 degrees by 2030, implies consequences so stark, while also being a mere abstract number, that it floats away from the human, the digestible and the tangible things that are the meat of contemporary politics.

The challenge of mobilising people in the face of this mother of all deadlines seems at once so distant — and the individual consumer, or commuter, so hilariously small in the face of it — that a deep apathy seems almost inevitable. Probably best to keep your head down and hope that somebody else will sort it out.

As I write this, wildfires are raging on Scottish islands and on the Yorkshire moors — in April. But the shock of such spectacles doesn’t offer much of a spur to action either. The pattern for how climate will disrupt our world feels contradictory — a slow, sapping, irreversible trend, that also provides sudden compelling shocks that arrive in a way that can be read as essentially random. If these events are bad enough, we call them natural disasters. Heavily ritualised responses are lauded by the most powerful politicians in our world, who then go on to preach the mantra of business as usual.

There are three basic responses to this communicative challenge.

The first, and by far the most reckless, attempts to place a green gloss over business as usual.  As the path of least resistance, it is by far the most mainstream. It acknowledges the moral issue, talks a good game about responsibility, and feeds the lie that our current system can deliver changes that flatly contradict the way it operates.

Jobs, growth, living standards, the promise of continued cheap abundance, are the kind of fare that we’ve learned to cling on to as voters and citizens. Since the post-war era, people get promised things by politicians — cars, houses, foreign holidays, decent public services — all of the staples of the policies that are geared to improving standards of living via economic growth. The problem here, and it’s a particularly painful one, is that this politics was always underwritten by cheap natural resources, and plentiful carbon reserves to burn. As we see the self-evident failure of that system to improve living standards after 2008, the temptation to ditch serious commitments to decarbonisation becomes all the more tempting. All the while, the market is supposed to deliver, via some arcane series of mechanisms that will prevent the profit motive from pursuing its inexorable search for cheap inputs.

The second approach amounts to a kind of moral quest. The great and the good will be lobbied, at Davos, at the next round of climate talks, at the UN or the EU, to disturb the slumbering consciousness of the powerful. It’s a liberal fantasy, in which the magic tools of clever persuasion will be used to outfox ever more blatant evil. Clever, powerful, people will do this for us. The hollowness of this approach can be seen in the telling response to the Extinction Rebellion protests — those with power from across the political spectrum are among the most incensed. The reason is very simple. The narrative of that quest, with its fantastic idea of moderate, incremental change (in response to a crisis that is already underway) is the basis of what keeps these people in power. They need the legion commuters and the logic of the rat-race so evident in a city like London, because their power depends upon it.

Why the open hostility? The moment that one commuter thinks of herself as something other than a unit on her way to produce a certain quantity of economic value, things begin to open up. She stops simply being that small piece of a blatantly unjust system and potentially becomes all of the other things that we, as a society, have forgotten to value. A citizen, a carer, a member of a community: someone with a meaningful stake in the wider web of life on which London, the first serious burner of coal on an industrial scale, is ultimately built.

This sentiment underpins the third response, which Extinction Rebellion represents in a nascent but vital form: to embrace the power of disruption. This is to realise, with a  reasonable degree of historic certainty, that change only ever begins from below. It is not passed down in an act of benevolence. Change is won by making a crisis tangible and impossible to ignore.

Like a freak weather event, Extinction Rebellion opened up that brief window of freedom that occurs when business as usual, those great destructive networks that shape and deplete life, are shut down. In these moments we can walk about our streets again and consider how best to live a life that is not premised on the oppressive instant gratification of an ‘on-demand’ economy. Disruption is everything: through the actions of the protest, the goal becomes more realisable and evident. We do not have to live like this.

But within that moment of disruption, we can discern something better than just escaping our current reality: a reality in which expectant parents discuss, with a calm inevitability, the great loss that, on current trends, will be their offspring’s inheritance. A reality that has wiped out 60% of animal populations since 1970. Taking place outside of the cycle of this despair that now governs out lives, the moment of disruption reminds us that there is a better way to live. As a result, the solution to the great challenge becomes disarmingly simple: a society that cares more, works less, buys less, competes less — and is richer in every meaningful sense.