So this is a promotional email from Andrew Yang’s Campaign for President, but I read it and I actually learned something. Which is why I support his campaign, not because I think he’s going to win (or ought to win) but because he is raising fundamental issues about our economy, our values and our collective lives as a nation in a profoundly intelligent way. Yang is addressing critical issues that no one is talking about and he’s offering workable and wise solutions that really address the issues.

Thank you for the support! I appreciate it a great deal.

I was in Seattle last week talking to an awesome group of supporters. One person who worked at Amazon commented on how the warehouse workers wear sensors that beep at them any time they fall behind a certain pace. That’s a clear sign of both where our economy is right now and where it is heading. I shared this story later with supporters in San Francisco. 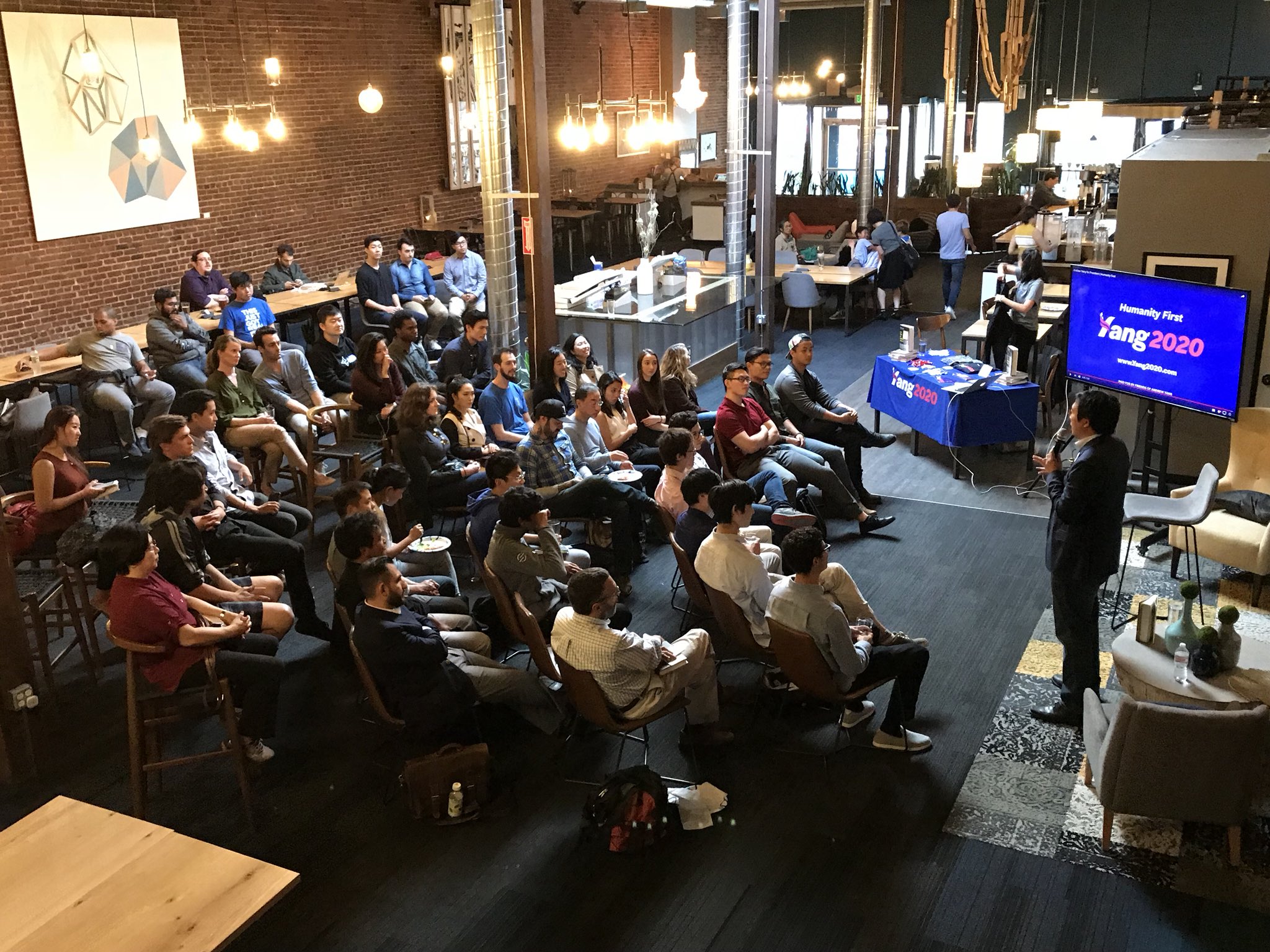 “We think of capitalism as being locked in an ideological battle with socialism, but we never really saw that capitalism might be defeated by its own child — technology.” This quote is from Eric Weinstein, a mathematician and investor who was recently interviewed in Vox. He says, “[W]e may need a hybrid model in the future which is paradoxically more capitalistic than our capitalism today and perhaps even more socialistic than our communism of yesteryear.”

I am convinced that he’s right. We do tend to think about capitalism and socialism as two opposing systems and philosophies. This tension gets reflected in our politics to the extreme. The truth is that we need them both, just in different areas and activities.

I am a serial entrepreneur. I started and ran several for-profit companies so I get the value of having to succeed in the market. And while the market does create immense value in many areas, it also ignores or creates the wrong incentives in others.

My friend Misha Chellam and I have begun calling this the ‘New Capitalism.’ We have been reflecting on how New Capitalism would improve on, or fix, Old Capitalism:

Moving toward New Capitalism will be incredibly difficult, as our institutions and systems are geared toward a single-variable view of the economy (GDP). The biggest transformative policy to get us there would be the Freedom Dividend, a basic income of $1,000 per month per American adult. As you all know, this is the center of my campaign for President.

The Freedom Dividend would transform the way Americans experience value, work, and their place in society. With assured economic security, millions would more seriously consider the work that they want to do and how society should progress. This is the fundamental policy that we need to evolve our economic system to the next stage.

These are very big ideas. It will take many of us pulling together to make them real. The stakes are very high, and we do not have much time before the edges of our current system crumble away. Look around – we are already seeing it happen around us.

Next week, I will be in Iowa for the Democratic Wing Ding, which is the headline event for Democrats in the state. It’s going to be me, two U.S. representatives, and Michael Avenatti. We are going to video the whole journey so you will see it unfold.

Please do help us make this case to our fellow Americans. With your help, we can shake our political leadership out of their stupor and get our act together.
Andrew Yang