Engage! is dedicating its space on the web to highlight one cause: end the imprisonment and torture of  infants and children in concentration camps on the Souther Border of the US. Detention Watch Network’s coalition works to end the imprisonment of migrant children in concentration camps, to end family detention, to end the abuse of women and children in immigrant detention centers, to demand justice for the “disappearance” of 1500 children under DHS custody…this brutality and injustice is an ethnic cleansing of migrant Latinos from the US.

The practice of family detention was escalated under the Obama Administration in 2014, and continues with increasing brutality under Trump’s overt policy of white supremacy targeting migrant families.

Detention Watch Network is a coalition of international, national, regional and local organizations working to protect and defend immigrants and refugees from detention and deportation, to advocate for families and children in DHS/ICE custody and detention centers, to end US policies of ethnic cleansing under the Obama and Trump administrations and enact protective immigration policies.

No One Is Illegal! 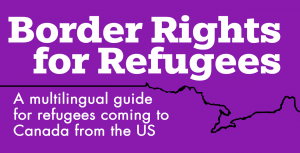 A free multilingual guide for non-U.S. citizens coming to Canada from the U.S. to make a refugee claim.

Detention Watch Network (DWN) members are working at the national, regional and local levels to fight against detention and deportation, while advocating for humane and just immigration policies.