I came across this very interesting dialogue between Josh Korda and Otto von Bush, a Buddhist practitioner who was also a fashion scholar, on the subject of Buddhist practice and fashion.

‘This book records a discussion on a Buddhist approach to fashion. The discussants are Otto von Busch, fashion scholar at Parsons the New School for Design in New York, and Josh Korda, a Buddhist teacher at New York Dharma Punx. The illustrations are by artist and fellow meditator Jesse Bercowetz.”

Being a Buddhist materialist who claims that our practices have material conditions and material consequences, I felt I had more to say about this topic than the typical answers provided by the Pali Canon. Although I respect Josh Korda’s orthodox perspective on this issue, taking a renunciate approach, I have a certain sociological take on fashion that a Buddhist psychoanalyst might not appreciate. To a sociologist, fashion is a social art form, a form of social communication, shaped in infinite ways by embodiment, culture, function, imagination, necessity, normativity, identity and social positioning.

Also as a queer Buddhist, I have rather a different perspective on what constitutes a ‘Buddhist approach’ to fashion. This post will be written in several installments as I pull together statements and images. So it’s one that I hope my readers will return to over the next several weeks and months to check up on the latest installment. I invite my readers to join in the discussion, to offer their ideas on Buddhist practice and fashion.

First, let’s take the topic of Dharma Punx as a style and as fashion, both visually and verbally.

Here’s a recent photo of Noah Levine and his buddies at a tattoo exhibition at a gallery in Las Angeles: 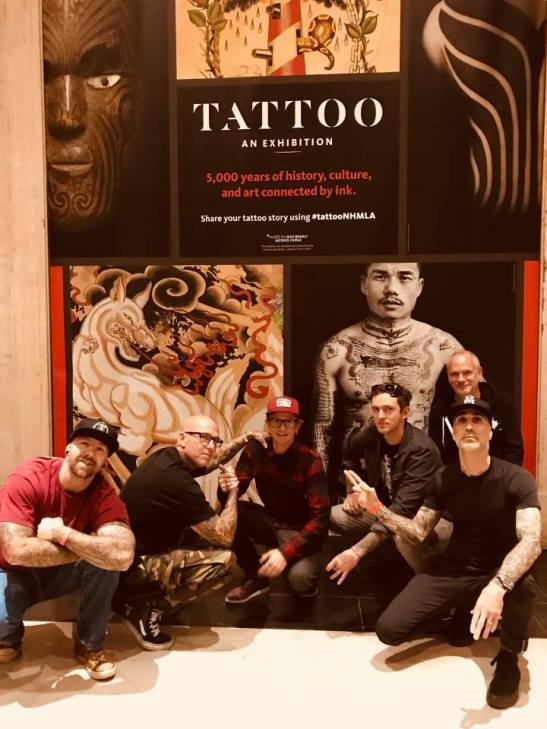 Noah is clearly a tattoo-afficionado, as is Josh Korda himself. I think they both respect tattoo as an art-form and as a personal statement about their bodies as a surface for art.

How is Dharma Punx a fashion statement? What is the Dharma Punx style as a ‘Buddha Style’?

Let’s examine several of the threads that go into making up Dharma Punx as a fashion statement, based on what can be observed here in this photo.

Dharma Punx has a definite machismo, a masculinity, I would say even hyper-masculinity, that has its roots in the punk rock and skateboard scenes. It’s street, it’s urban, and it’s largely a style of working-class whites, although Black and Latino punx are certainly part of the scene.

If, as Josh Korda claims, fashion is an empty and addictive act of consumption, a meaningless attempt to solidify an identity that doesn’t exist (non-self), with no relationship to one’s life as a Buddhist practitioner, how does that square with Dharma Punx’ careful, conscious, even obsessive attention to punk fashion: body-covering tattoos that cost thousands of dollars and take years to accumulate; the careful selection of punk t-shirts and tags, shoes, hats that all fit the urban-punk-skateboard aesthetic? What about Dharma Punx is anti-fashion or ‘not a style?’