Greg Snyder, Zen teacher, at the second conference on Buddhism and Race at Harvard Divinity School, said “The Buddha asked us to be critically engaged. We talk a lot about being present, but the Buddha asked us to look and really see how things came to be, and that’s a critical engagement. That’s not just watching for the sake of watching. I’m watching in order to understand the roots of the suffering that is occurring at this time.” The video below discusses practices that enable awakening to race:

As a racialized white person, I’m interested in liberating myself so that I can participate in the dismantling of white supremacy. I’ve decided to work with a secular social justice group, SURJ, Standing Up for Racial Justice, as a way to continue educating myself, getting “woke” on racial issues, and participating in the work to dismantle white supremacy. In the past, I have also suggested that people investigate White Awake, which is specifically designed for racialized white Buddhist practitioners.

I use Buddhist practices of mindfulness on racial tension and white fragility (rage, discomfort, tension, avoidance, blocking, projection, blame, victimization, guilt and shame, etc). I repeatedly expose myself to discussions on racism and white supremacy by watching videos such as the Conference on Buddhism and Race, and any media (articles, books, podcasts, etc) that discusses racism and white supremacy. I expose myself to this material and notice, without judgement, all the feelings and thoughts that come up, using compassion practices taught by Pema Chodron to “become friendly” with those thoughts and feelings. In this way, I become familiar with my internalized white supremacy and all the feelings and ego defences (projection, avoidance, self-righteous justification, blame and shame) that perpetuate those feelings and defences.

By continuously exposing myself to this material I overcome white fragility and develop white resilience to the conflict and tension around race. In addition to increasing my capacity to work for racial justice, it just makes me a stronger, more courageous person overall. I can then move through the world without fear of racially charged situations and with more love and compassion for all racialized people, both white and people of colour.

There’s nothing worse than confronting a racilaized situation and feeling, as a white person, that you have no idea how to react or what to say or do. Worse, you end up saying or doing something really stupidly “white” and racist and then hate yourself for it. White people need to develop skillfulness around racial issues and white supremacy, knowing how to act out of wisdom and compassion and truthfulness rather than defensive reactivity. It’s because many white people have habitually avoided dealing with racism that we have no skills for dealing with it. The best way to become skillful around racial issues is to educate yourself by repeatedly exposing yourself to the discussions, arguments and language around white supremacy and racism, and thereby gain the specific skills to deal with those issues. Those skills can be transferred to many other situations of difference that require skillfulness.

As a born-female and gender-queer person, I have often been fascinated with the construction of my gender and sexual identity. I have studied heteronormativity, patriarchy, feminism and queer studies throughout my life, and often from the perspective of feminists and queers of colour. I am also quite fascinated by the construction of my racialized whiteness and white supremacy. I find this subject interesting to me personally. I’m curious about the way my whiteness is socially constructed and I want to understand more about it. I want to understand how white supremacy has been constructed historically and how it continues to operate today.

From a dharma perspective, collective ‘awakening’ is to “see through” the social structures that construct our experience, our institutions and way of life. Social structures are “empty”—they are only concepts and patterns of behaviour—but they are nonetheless “real in their effects.” The most powerful social construct that we need to deconstruct, or “see through”, is the construct of race and white supremacy. If we don’t see the huge power and influence of racism and white supremacy—how it shapes economies, opportunity structures, state power and legal sanctions, cultures and individual life chances—then we remind blind to its massive violence and destructive force in human societies, i.e. white blindness:

In other words, dominant group members work hard not to see our privilege, which is a key way we keep it protected and intact. As noted earlier, willful ignorance is a dynamic of internalized dominance; for those in dominant groups, the refusal to know protects power. (Sensoy, DiAngelo, “Respect Differences? Challenging the Common Guidelines in Social Justice Education” http://democracyeducationjournal.org/home/vol22/iss2/1

The SURJ website has excellent resources for white people who are interested in undoing whiteness. Furthermore, SURJ has a regular program of conference calls to educate white people on racial issues and facilitate organizing. SURJ also has local groups that are actively organizing in cities throughout North America. 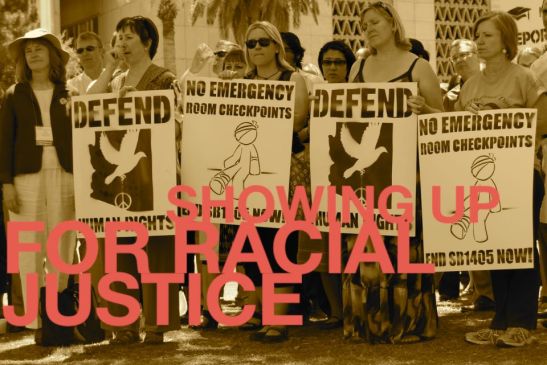 SURJ is a national network of groups and individuals organizing White people for racial justice. Through community organizing, mobilizing, and education, SURJ moves White people to act as part of a multi-racial majority for justice with passion and accountability. We work to connect people across the country while supporting and collaborating with local and national racial justice organizing efforts. SURJ provides a space to build relationships, skills and political analysis to act for change.

We envision a society where we struggle together with love, for justice, human dignity and a sustainable world.

Our focus is on working with White people who are already in motion. While in many activist circles, there can be a culture of shame and blame, we want to bring as many White people into taking action for racial justice as possible.

The battle is and always has been a battle for the hearts and minds of White people in this country. The fight against racism is our issue. It’s not something that we’re called on to help People of Color with. We need to become involved with it as if our lives depended on it because really, in truth, they do.

We know that we will have to take risks. Everyday, People of Color take risks in living their lives with full dignity and right now we are in a moment where young Black people are taking risks everyday. We challenge ourselves and other White people to take risks as well, to stand up against a racist system, actions and structures everyday. We know that in that process, we will make mistakes. Our goal is to learn from those mistakes and keep showing up again and again for what is right and for racial justice.

We use the term mutual interest to help us move from the idea of helping others, or just thinking about what is good for us, to understanding that our own liberation as white people, our own humanity, is inextricably linked to racial justice. Mutual interest means we cannot overcome the challenges we face unless we work for racial justice.  It means our own freedom is bound up in the freedom of people of color.  For Anne & Carl Braden, it was mutual interest that caused them to de-segregate an all-white neighborhood in Louisville Kentucky in 1954.  It was a belief in what was right and the idea of showing up again and again for justice.

It really boils down to this: that all life is interrelated. We are all caught in an inescapable network of mutuality, tied into a single garment of destiny. Whatever affects one directly, affects all indirectly.

This entry was posted on 2016/12/09 by Shaun Bartone and tagged Critical Buddhism, dharma, racism, social action.