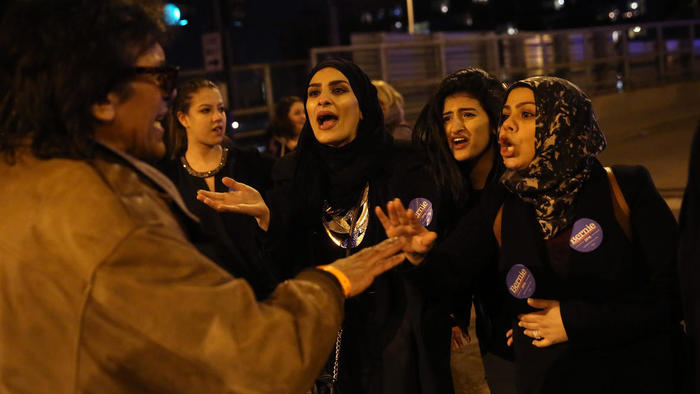 When black, Muslim and Latino student activists at the University of Illinois at Chicago heard last week that Donald Trump was planning a rally on campus, they did what any good organizers do in 2016: They went online.

Within days, thousands of people had liked a Facebook page called “Stop Trump – Chicago.” Tens of thousands added their names to a MoveOn.org petition calling on the school to cancel the rally.

They all had one thing in common, said Casandra Robledo, a second-year student who helped organize the protest: “We felt so strongly that Donald Trump and his bigotry and racism wasn’t welcome here.”

The students’ large demonstration at Trump’s rally Friday night led the Republican presidential candidate to abruptly cancel his planned appearance and sparked a melee between Trump supporters and protesters that resulted in multiple injuries and arrests.

Trump took to Twitter on Saturday morning, calling the protesters “thugs” who denied him and his supporters their 1st Amendment right to free speech.

“The organized group of people, many of them thugs, who shut down our First Amendment rights in Chicago, have totally energized America!” he wrote.

The clashes marked the most violent episode of a campaign that has grown increasingly tense since the businessman and reality television star announced his bid for the Republican presidential nomination last summer.

Activists angered by Trump’s inflammatory statements on immigration, Islam and other topics now show up at nearly every public event.

They are typically escorted out by police as his supporters cheer. One Trump audience member was recently arrested after he punched a black protester who was being led away.

Ahead of the Chicago rally, the students cited safety concerns in letters to campus officials that urged them to cancel the event.

“As an undocumented UIC graduate student, I feel unsafe knowing that Trump along with his followers will be at my university,” organizer Jorge Mena wrote in an open letter to the school’s administration. “We already face systemic violence but we’re increasingly becoming targets of attack by his followers on and off Trump’s campaign trail.”

Some campus faculty joined in, penning a separate letter to school officials.

Amalia Pallares, a political science professor involved in the effort, said she believes Trump’s divisive rhetoric is inconsistent with the university’s values of inclusion. “We didn’t feel this was the right venue for this kind of event,” she said in an interview.

“We were not opposed to free speech,” she continued. “It was a security issue. We felt that it would be a big challenge for the university to protect the students.”

Planning for the event started Monday night, when leaders from a range of groups gathered in a campus lecture hall. They included the Black Student Union, the Muslim Student Assn. and the Fearless Undocumented Association, which advocates for immigrants in the country illegally.

Other local and national activism groups also got involved, including some local labor organizations, Black Lives Matter and MoveOn.Org, which has endorsed Democratic candidate Bernie Sanders.

Nick Berning, communications director at MoveOn.Org, said his organization printed signs for the protesters and sent out an email blast to its members in the Chicago area inviting them to join.

Tess Raser, an organizer with Assata’s Daughters, a group of black women that has protested police violence, said her organization saw the protest as an opportunity to connect Trump’s racist rhetoric with institutional racism in Chicago.

The demonstration kicked off Friday afternoon, with a rally on campus where Muslim and Latino immigrant students spoke. Protesters then marched to the rally site carrying a banner that read: “Trump makes America hate. Our students make America great.”

While some protesters stayed outside, others went into the event, many of them concealing anti-Trump posters under their clothes.

When Trump officials announced that the candidate wouldn’t be appearing because of security concerns, the crowd erupted, said B. Loewe, an organizer with a Latino group called Mijente, who was present at the rally. Trump supporters were angry, he said, and protesters were celebrating.

Some protesters chanted, “We stopped Trump,” he said, while others sang the lyrics to a Kendrick Lamar song, “We Gon’ Be Alright,” that has become an anthem of the Black Lives Matter movement.

Others in the crowd yelled slogans in support of Democratic presidential candidate Bernie Sanders.

Organizers of the demonstration and Sanders said Saturday that the protest was not in any way officially affiliated with his campaign, despite claims from Trump on Twitter that it was “Clinton and Sanders people who disrupted my rally.”

“As is the case virtually every day, Donald Trump is showing the American people that he is a pathological liar,” Sanders said in a statement. “Obviously, while I appreciate that we had supporters at Trump’s rally in Chicago, our campaign did not organize the protests.”

On Saturday, as Trump held more rallies across the Midwest, activists in Chicago and around the country were talking about what comes next.

Tia Oso, national coordinator for Black Alliance for Just Immigration, which works with Black Lives Matter activists, said protests of Trump rallies “will most certainly” continue in the months ahead.

“He’s viewed as this legitimate candidate and as people begin to see he could possibly lead this country, they’re going to push back against him and what he’s throwing out there,” Oso said. “You can’t go around saying you’re going to ban all Muslims and not think people are not going to be upset. You can’t bad mouth Mexicans and think everyone will just be all fine with it.”

Patrisse Cullors, a leading force behind Black Lives Matter, said “the protests, the disruptions will continue.”

“Without disruption there is no progress,” she said.

This entry was posted on 2016/03/13 by Shaun Bartone and tagged Uncategorized.