Unbearable Whiteness of Being

This article by Afrosapiophile brings up an issue that I immediately connected with. It helped me identify a deep discomfort that I’ve had with white-majority western sanghas in North America. After a couple of years in various white majority sanghas, I felt totally repressed and oppressed every time I walked through the temple door. I couldn’t identify the problem exactly, but I knew it had to do with white supremacy. My experience was that these sanghas were steeped in a culture of white supremacy. It was totally oppressive to me and several of my white friends. White supremacy so bad even white people couldn’t stand it. This article helped me identify that sense of oppression and put a label on it: toxic whiteness. That’s what I experience in white-majority sanghas—toxic whiteness. I can’t stand it. It’s so bad I just want to stay out of white-majority sanghas altogether. The pious rigidity, the subliminal digs, the expectation that you will never show any emotion or have any strong feelings about anything. I could not cop the stupefied zombie look. It’s so thick it I actually feel like I’m going to choke, like I can’t get any air and I have to run out of the temple just to breathe. When I walked into Nalandabodhi’s shrine room on Quinpool in Halifax, I used to call it “the repression chamber.” Toxic whiteness so bad it’s actually toxic to white people. And of course it sends out a message to people of colour, and queer people, and disabled people, “don’t come here unless you measure up to our standards of whiteness.”  I experienced toxic whiteness in so many white-majority sanghas that I nearly quit Buddhism altogether. It’s the main reason I call myself a post-Buddhism Buddhist, because I don’t want that toxic whiteness shit coming down on me. And no I don’t have to “act Black” in response. I can just be the loud-mouthed Irish-Italian faggot I have always been.

In a new interview with BBC, Rachel Dolezal talks about being punished as a child for doing things like, dancing, being sensuous, and expressing herself “loudly”.  She was oppressed by her white parents, who corrected her with violence, for acting outside her socially conditioned role as a white girl. 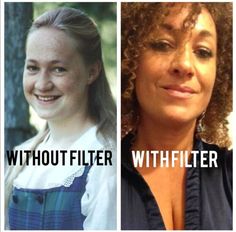 Because race is a social construct, qualities like, “being sensuous, and enjoying dancing” are applicable to all human beings — not just black people.  Therefore, what makes the difference between black women and everyone else who have similar qualities, is the lived experiences of black women in our complex social world.  We may not all have the exact experience, but black women have empirical evidence to back their identities.

Also, to assume, “because my parents spanked me for not being modest — therefore I am black woman” — assumes promiscuity of black women — which is inherently racist.

Black women are used in white supremacy, as an “Other”, a mutually exclusive category to create “US” and “THEM”.  Toxic whiteness is born from this process of division.  By labeling the behaviors of black folks as inherent to their race, we in turn create a category of “whiteness” in response.  If black girls are fast, white girls must be modest.  If black girls are loud, white girls must be polite and quiet.  Rachel Dolezal isn’t black, she’s a product of white supremacy, and toxic whiteness.

Toxic whiteness is the assumption that some behaviors like, “being sensuous and enjoying dancing” are inherently “black”, and in order to maintain whiteness, we refuse to be sensuous and enjoy dancing (in Rachel Dolezal case).  Rachel Dolezal’s racist parents, ultimately buy into toxic whiteness, by limiting the varied qualities of what white people can be/should be/are like, and by enforcing this onto their white daughter, they harmed her.

In order to create the category of “white femininity” that deserves protection, black women must occupy the space of the promiscuous, sex-thirsty, jezebel.  In “Ain’t I a Woman”, Bell Hooks talks about the origins of the tension between black womanhood and white womanhood.

White men put white women on a pedestal: they were modest, domestic, and cared for their men.  White women were dainty and the highest expression of femininity, and therefore deserved protection in capitalist society.  However, the very men who elevated white women, would rape black women and have mixed children.  The contradiction gave rise to the tension between white and black femininity and womanhood today.  Black women, like white women, were denied agency, autonomy over their bodies and lives, just one group were afforded privileges in the system.

In order to secure the privileges that come with white femininity, it is important to be modest, domestic, and prudish.  We could get into how this ideal has been promoted by respectability politics; but I digress.

White parents use anti-blackness as a way to maintain and secure white womanhood, and Rachel Dolezal is an example of this.  Claiming, “race is a social construct– a lie” dismisses that we have many social constructs that become “real” because of the social world we live in.

Rachel Dolezal will never be a black woman, despite “acting black” as much as a black woman is a white woman for, enjoying reading and sounding “white”.

This entry was posted on 2017/04/02 by Shaun Bartone and tagged social action.